A bill signed into law by Governor Jan Brewer will ease the tax burden of equine-based operations in the Northeast Valley of Arizona by changing tax classifications to agricultural instead of commercial.

Previously, for the purposes of property taxes, breeding was the only equine-based operation considered agricultural by the Arizona Department of Revenue.All other equine professional operations were considered commercial and taxed at a higher rate.

The bill will go into effect next month.The state Department of Revenue is creating the guidelines for the new law, which will be enforced by each county's assessor's office.

Philip Bashaw, government relations manager for the Arizona Farm Bureau Federation, said that in recent years, a number of horse farms were being classified as commercial when historically they had been considered agricultural.

Arizona's horse industry generates more than a billion dollars a year, according to a University of Arizona College of Agriculture and Life Sciences study released in 2001.

Rep. Heather Carter, a Republican representing much of the Northeast Valley, co-authored the bill. She said the new law is intended to protect property taxpayers who were historically treated one way but had their tax status changed even though their business did not.

The law will not apply to horse hobbyists who own one or two horses in their backyard. Ultimately, the Department of Revenue will determine the full implementation of the new law, Carter said. 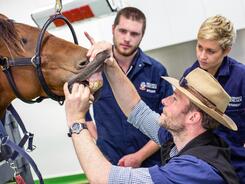