According to a 2017 National Economic Impact Study by the Washington DC-based American Horse Council, the horse industry contributes $50 billion in U.S. economic impact (plus 975,000+ jobs) plus another $122 billion/1.7 million jobs in “ripple effect” through additional sectors of the economy.

HORSEPOWER ensures that care and protection of equines becomes - and stays - a priority in the halls of the New York state capitol.
© 2008 by Louis New window.

Looking at New York State, the equine industry is the second-largest agricultural commodity after dairy, produces goods and services valued at $2.4 billion annually, provides 35,000+ fulltime jobs, and it is estimated that nearly a quarter of a million horses reside there, with 70% involved in showing and recreation, reflecting an overall value of more than $2 billion.*

What the Empire State has not had – until now – is an organization solely focused on equine welfare and spurring legislative action, including the driving or reviving of proposals and amendments languishing -- sometimes for years -- in capitol arenas.

Meet HORSEPOWER, Inc., People Organizing for the Wellbeing of Equines and their Rights, based just a trot from the steps of the State House and fueled by more than 75 years combined experience in lobbying, legal and government affairs, as well as a cadre of media and marketing professionals who have represented such iconic brands as Dior International and the Olympic Games.

“We believe it is within the realm of possibility to honor and protect equine welfare and allow for their participation in sport. However, the latter must be preceded by stronger regulations, care, and humane approaches.

“HORSEPOWER ensures that care and protection of equines becomes – and stays – a priority in the halls of the state capitol.”

“That’s why HORSEPOWER was established: to protect equine health and welfare, raise awareness about inhumane practices, and effect change in public policy. We can be the engine to give horses a voice,” added co-founder Nancy Miller, a competitive rider whose work with a US News-ranked Tier 1 law firm has included saving millions of dollars for such clients as large transportation and pharmaceutics.

“Given how there has been no organization solely focused on equine welfare in New York State, little to no legislation in the arena has advanced,” Carreau said, “As a matter of fact, most of it has languished for years.”

Among current legislative proposals HORSEPOWER has identified as awaiting attention are two regarding the prohibition of slaughtering horses for consumption (S.1497/A1102 and S.5983), the establishment of a Committee on Retired Racehorses (S.1974/A3535), providing a check-off box on State tax returns for gifts to the NY State Horse Retirement Rescue Fund (S.2615/A2559), and providing a tax exemption for commercial horse boarding services (S3389).

An inaugural introduction to HORSEPOWER will be held Friday evening, February 21, at the annual CCE (Cobleskill Cooperative Extension) Horsemen’s Social, at The Saratoga Winery in Saratoga Springs.

In conjunction with introducing its mission to equine professionals in Saratoga County and the Capital District at the Horsemen’s Social, HORSEPOWER will go live with its website, www.horsepwr.org, where Empire State equestrians can follow news, find information, and learn how to #betheengine for change in New York State horse welfare. 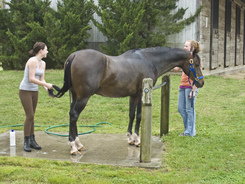 A Vet's Guidance for Saving Horses in Need, Plus Training …

For The Herd: Haygain Helps the Horses Who Started Our …