Sales reps from the equine business at Boehringer Ingelheim Animal Health USA Inc. sat around tables in a conference room at the Hilton Orlando hotel on a recent Tuesday afternoon. They had descended on Florida from all over the United States with several hundred colleagues for a four-day National Sales Meeting. The team had just finished talking about financial performance and future plans when the focus shifted to the enduring power of the human-animal bond.

A colorful miniature horse running in a pasture

For people who make their living selling vaccines, therapeutics and parasite-control products that keep animals healthy, Magic's presence was a tangible reminder of how horses enrich the human experience.
© 2009 by Pete Markham New window.

A video playing on screens at the front of the room told the story of Gentle Carousel Miniature Therapy Horses, a nonprofit organization that brings miniature horses into homes, hospitals and hospice-care centers to help people affected by violence, tragedy and trauma.

The organization has 19 therapy horses in the United States and 11 in Europe. Trained to venture indoors, the horses comfort first responders, sick children and others affected by mass shootings, serious illness and natural disasters. The group says its horses visit about 25,000 people a year.

“When elevator doors open in the hospital and a horse comes out, children stop thinking about chemotherapy,” said Debbie Garcia-Bengochea, co-founder of Gentle Carousel.

Some in the conference room in Florida wiped tears as a video described how the mere presence of a miniature horse can offer a respite from human suffering, if only for a few moments.

The sales reps turned their heads and pulled out their phones when a handler led one of those horses into the conference room.

She also followed invitations to Charleston, South Carolina, after a gunman killed nine people at the Emanuel African Methodist Episcopal Church in 2015, and to Moore, Oklahoma, where a tornado killed 24 people and injured more than 200 others in 2013.

TIME magazine named Magic one its 'Top 10 Heroic Animals'. The AARP named her winner of its 'Most Heroic Pet” contest. In 2015, horse lovers inducted her into the United States Equestrian Federation / Equus Foundation Horse Stars Hall of Fame.

Shields helped arrange a visit by Magic last August to the headquarters in Duluth, Ga., of Boehringer Ingelheim’s animal-health business in the United States. The horse went floor-to-floor, standing still as employees spilled out of cubicles and offices to stroke her mane and pose for pictures.

Equine team members Kelli Andonian and Shontel Cosby were instrumental in coordinating that visit, timed to coincide with Equine Month. They also played a key role in lining up Magic’s attendance at the National Sales Meeting in Orlando, about 115 miles from Gentle Therapy Carousel’s home base in Gainesville, Florida.

"We wanted employees other than those in our home office to experience what we experienced in Duluth with that human-animal bond," Shields explained.

"Having Magic visit members of the equine team dovetailed with a team slogan that says 'Horses make us better, and, together, we make horses better, too'," shared David Gocken, who leads the equine team at Boehringer Ingelheim Animal Health USA Inc.

Magic elicited such a response that Boehringer Ingelheim is in discussions to contribute money to support Gentle Carousel. The money would help pay for a specialized van to transport horses to events rather than a traditional truck and trailer.

That would let the therapy horse owners park in regular parking spaces at hospitals and other sites, rather than driving around to look for a spot big enough for their vehicle with a trailer. 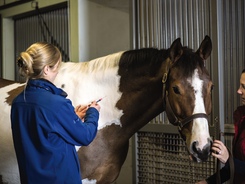 EQUUS Launches "Farm Calls" Podcast Brought to You by …

A New Year of Horse Health …