As the country’s leading service organization keeping trails open for horse use, Back Country Horsemen of America makes trail work a lifestyle. But they really get busy when there’s a good excuse to do trail work, and National Trails Day, on June 2 this year, is one of their favorite holidays. 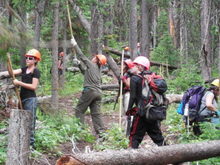 BCHA is a non-profit corporation bringing about positive changes regarding the use of horses and stock in wilderness and public lands.
© 2014 by BCHA

The San Joaquin-Sierra Unit of Back Country Horsemen of California works regularly in the Sierra National Forest. They recently held a work party on both wilderness and non-wilderness trails in the John Muir and Ansel Adams Wildernesses near Edison Lake. A second work party continued ongoing improvements to Chamberlain Camp near Courtright Reservoir. These work parties were made possible by a BCH Education Foundation grant.

Fourteen chapter members formed the first party, a week-long stay based at the High Sierra Pack Station. With diligent work, they cut a total of 28 trees and brushed out a 200-foot section of badly overgrown trail at a creek crossing.

The second work party went to Chamberlain Camp, an historic cow camp that is on the edge of the John Muir Wilderness. The San Joaquin-Sierra BCH has adopted this area and over a number of years has made numerous improvements, such as building an accessible outhouse, installing bear proof food lockers, and building hitching rails and tables. Old fencing has been removed from the perimeter of the meadow and packed out.

Chamberlain Camp is a valuable amenity. Less than two miles from the trailhead and accessed over easy terrain, it’s an ideal location for the unit to take novice riders, youth groups, and members that are interested in learning to pack, without the difficulties of a longer wilderness based trip.

Back Country Horsemen of Central Arizona recently completed an interesting and challenging packing assignment. They assisted a wildlife biologist from the Coconino National Forest Red Rock Office in packing out old fence materials from the Cottonwood/Mesquite Springs area near Camp Verde.

Because of the size and awkward shape of the materials, it took some creative packing, master packing skills, and seasoned stock. They packed out several sheets of tin, over 50 coils of old wire, and dozens of metal t-posts and wooden stays. Removing debris like this is important because it sullies the pristine environment of the area, and can cause injury to recreationists or wildlife.

In their effort to keep trails open for all users, San Juan Back Country Horsemen has adopted two trails, the Anderson and the Archuleta. Over the last several years, it has become a huge challenge to keep these trails safe and open, due to beetle kill destroying so many trees in Colorado’s southwest mountain forests.

Ten club members with five stock horses and several folks on foot participated in a recent work party on the Anderson Trail in the Weminuche Wilderness. They carried in cross cut saws, hand saws, pole saws, and pruners, and worked a combined total of more than 65 hours.

The group found the first of seven trees to be cleared was located four miles in, at over 8,500 feet elevation, through some very difficult trails. They cleared fallen debris, stray rocks, and overhanging branches, plus heavy brush in some very rough, rocky areas. Seven downed trees that were blocking the trail were completely cleared: no simple task! With sustained effort, they were able to open the trail all the way to the tree line.

About Back Country Horsemen of America

BCHA is a non-profit corporation made up of state organizations, affiliates, and at-large members. Their efforts have brought about positive changes regarding the use of horses and stock in wilderness and public lands.

If you want to know more about Back Country Horsemen of America or become a member, visit their website: www.bcha.org; call 888-893-5161; or write 59 Rainbow Road, East Granby, CT 06029. The future of horse use on public lands is in our hands!