In one of her most recent shows, Ellen DeGeneres took a stand against Ag Gag bills and argued that such pieces of legislation did no more and no less than keep animal activists from documenting cases of abuse and rescuing animals. 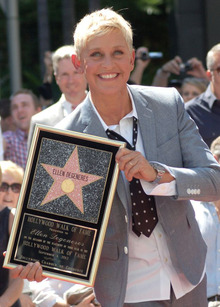 Ellen DeGeneres, Wayne Pacelle of HSUS, and others are speaking out against AG Gag bills that prevent animal cruelty investigators from doing their job.
© 2013 by Angela George

Ellen DeGeneres is not the first public figure to speak out against such bills and their keeping animal cruelty investigators from properly doing their job.

Thus, it was only a couple of days ago when singer Carrie Underwood caused quite a Twitter stir by lashing out against Tennessee's getting ready to embrace one such bill.

Ellen DeGeneres was not alone in speaking against Ag Gag bill. Wayne Pacelle, the current president and chief executive of The Humane Society of the United States, also made an appearance on the show.

“I've been really concerned. I’m seeing more and more states considering what are called Ag Gag or anti-whistleblower bills. And we have undercover investigators who go find terrible things at factory farms, or at puppy mills or at horse stables where people are injuring the horses,” Wayne Pacelle reportedly said.

“They’re trying to make it a crime for us to take pictures or video of animals in these settings, because so many of our investigations have yielded incredible results,” the president of the Humane Society of the United States further argued.

Both Wayne Pacelle and Ellen DeGeneres asked that members of the public try to convince Gov. Bill Haslam that vetoing Tennessee's Ag Gag bill was the right thing to do.

Naturally, Carrie Underwood was beside herself with joy when hearing the news that other celebrities had taken an interest in fighting said bill.

In an interview posted on her website,  Degeneres gives Wayne Pacelle, the Humane Society of the United States’ president, an opportunity to call on her viewers to contact Haslam’s office and ask him to veto the bill. DeGeneres also pledged to donate $25,000 to the organization if the video is shared 25,000 times