It's another cold morning as you head to the barn wondering what your horse's legs will look like today. It isn't a pleasant walk when you're not expecting overnight improvement. 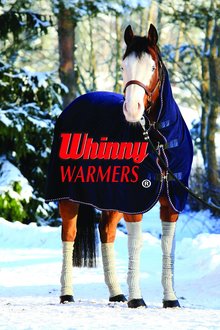 Fighting equine pastern dermatitis, mud fever or mud rash, dew poisoning or greasy heel is frustrating in any season but winter makes it especially hard.
© 2019 by Sox for Horses

It also doesn't seem right that the pastern dermatitis that began showing on your horse's legs seemed to begin later, rather than earlier in the summer or even late spring. But that's how it is with your horse, every year, at almost exactly the same time.

You start dealing with it in August and before you know it, it's the holidays and then, all too often, it's January or February before you see healthy legs again.

All this time your veterinarian has probably been administering steroids and antibiotics for the sudden and horrifying bouts of cellulitis. The edema finally goes down, but you're still wrapping and applying medications with the hope of healing all those leg sores.

Then one cold morning, just as your care taking looked like it was going to be rewarded and your horse's legs were starting to heal and look good again, you look down and... the scourge is back.

Fighting dermatitis is frustrating in any season but winter makes it especially hard. You would think, with the end of hot, sticky summer temperatures, that EPD (Equine Pastern Dermatitis) would also disappear, along with the season's disease-carrying flies. But this is not true.

Also known as scratches, mud fever or mud rash, dew poisoning or greasy heel, EPD is a syndrome identified by such award-winning equine dermatologists and authors as Professor Rosanna Marsella, DVM, of the University of Gainesville (FL), that is caused by a variety of diseases affecting the lower legs.

"This condition is the bane of existence for horsemen who need to keep their horses in fit and working condition," noted Gregory L. Ferraro, DVM, in a white paper published by the Journal of Equine Veterinary Science.

Ferraro and the University of California-Davis Center for Equine Health have continued to study this condition, theorizing that pastern dermatitis is not a simple infection by some single identifiable and easily eliminated microbial agent, but rather the manifestation of an extremely complex immune-mediated disease phenomenon.

While veterinary medical scientists are working hard to better understand this disease, a cure is a long way off.

Dr. Ferraro concluded, "It is possible through the implementation of a diligent, daily program of cleanliness and decontamination."

Bacteria and fungi that gain hold in the last of the warm months still exist in a new season's environment. Unfortunately, wrapping legs, cutting off air to tissue, and keeping tissue warm and wet give bacteria and fungi what they need to continue to propagate.

With those horses whose immune systems are the most compromised and most susceptible, there is nothing to prevent EPD from returning except to change the environment that encourages it. That's where Sox For Horses Silver Whinnys® come in.

Silver Whinnys were originally created as fly protection for equine legs, but because Raymond Petterson, president and inventor of Sox For Horses, was looking at the bigger picture in ideal leg protection, it became clear that there were key decisions to make in yarn construction and sock design that would lead to a better bandaging system.

The most powerful bandaging will always 1. Be hygienic, 2. Allow air to reach tissue and 3. Wick excess moisture from skin. These three qualities combined are counter to supporting the kind of environment where bacteria and fungi thrive. EPD can only return if the environment is cooperative and a horse is susceptible.

"They have proven to do so many times, not because they have interaction with the skin but because they are simply the perfect protection, the perfect bandage. Silver Whinnys® high-tech bandaging and leg protection utilize embedded silver that reduces bio-burden on the contact surface of our Sox, creating a hygienic environment."

"Air reaches the skin surface while the moisture-management qualities of the yarn keep tissue dry and protect against environmental dirt, insects and debris," he says.

Don't dread your dawn walks to the barn. Give your horse a break from the pain and constant irritation of dermatitis. In comparison to expensive medications and vet visits, SFH Silver Whinnys® are one of the best and most money-saving tools you can keep throughout the seasons at your barn and in your barn's medical chest.

SFH Whinny Warmers are made with scientific groundbreaking Celliant®, upping "the C in care" for horses compromised by cold temperatures. Learn more at www.soxforhorses.com.