An article by Kenneth L. Marcella, DVM, in Thoroughbred Times discusses the drug pentosan polysulfate which has been used in Australia and parts of Europe for more than 30 years and the possible positive effects it might have in treating osteoarthritis in horses. Originally, this multifaceted drug was used to help prevent blood clots and fat buildup in humans.

Although specific research investigating pentosan polysulfate's possible benefits in the horse were not done at that time, veterinarians began using it as a treatment for equine osteoarthritis.

Researchers then discovered the anti-arthritic properties of sodium pentosan polysulfate, which was approved as an injectable treatment for osteoarthritis in dogs in Australia in 1986. Pentosan was soon approved for use as a joint treatment for humans throughout most of the European Economic Community, Scandinavia, South Africa, and Australia.

Although specific research investigating pentosan polysulfate’s possible benefits in the horse were not done at that time, veterinarians began using it as a treatment for equine osteoarthritis. Claims both for and against its efficacy have circulated for years.

Recent studies have produced a more complete understanding of the workings of this anti-arthritic medication, which may have contributed to a new resurgence of interest in the use of pentosan polysulfate in sport horses in this country.

Pentosan is a polymer produced from beech wood. It can be administered orally, intramuscularly, intravenously or as a joint injection (intra-articularly). Adverse side effects are related primarily to dose. And because of pentosan polysulfate’s primary function as an anticlotting agent, it is not recommended for use in post-surgical cases, horses with prior bleeding problems, or in situations where trauma and possible bleeding could result.

Because one of the primary areas in equine practice where arthritic treatment is routinely used is sport-horse medicine, and because these equine athletes are more at risk for exercise-associated trauma and possible bleeding, pentosan polysulfate use should be carefully considered, and attention should be paid to dosage and frequency.

Veterinarians and trainers in Australia and Europe have routinely used pentosan polysulfate in racehorses with no documented increase in problems associated with exercise-induced pulmonary hemorrhage (EIPH) or other bleeding problems.

Cathy Fuller, B.V.Sc., Ph.D., and colleagues in the Department of Anatomy at the University of Bristol in Langford, England, were the first to demonstrate that intramuscular injections of pentosan polysulfate showed sufficient concentration of the drug in synovial (joint) fluid.

This proved that injecting pentosan polysulfate into a horse’s muscle eventually got the drug into the joints. They reported, “The concentration was sufficient to elicit a potential therapeutic effect on synoviocyte metabolism, and possibly also to stimulate proteoglycan synthesis and reduce matrix metalloproteinase (one of the major cartilage degradation agents) activities in articular or joint cartilage.”

Recently, David Frisbie, D.V.M., Ph.D., and members of the Orthopaedic Research Center at Colorado State University investigated pentosan polysulfate’s actions on 18 horses that underwent surgically induced osteoarthritis. In this study—one of the first to look at the clinical use of pentosan polysulfate in arthritis in horses—various parameters were used to determine the efficacy of pentosan polysulfate, including “blinded” lameness and range-of-motion examinations (research evaluators were not disclosed which horses had received the drug verses a placebo), analysis of blood and joint fluid, and serial radiographs.

Researchers in this study acknowledged that pentosan polysulfate produced trends that were not highly statistically significant but that showed more positive recordable differences between the treated and untreated groups at the cellular level than at the clinical level.

Pentosan polysulfate is generally given in the muscle once weekly for four to five weeks and then monthly thereafter, though there are many variations on that protocol. Response is usually seen clinically after the first two doses.

A new product available in Australia combines pentosan polysulfate, glucosamine, and hyaluronic acid and is given intravenously every week for four weeks. This combination seeks to provide maximal help for the cells that make up the joint capsule, the joint fluid, and the articular cartilage, and the bone beneath (subchondral bone).

This product is not yet available in the U.S., and pentosan polysulfate is not currently approved or being produced by a company in this country. However, it is available through compounding pharmacies as an off-label product, and its use and distribution should be controlled accordingly.

Perhaps it is its newness in this country or the constant search for a novel product that will allow equine athletes to perform at their best that has fueled the increased interest in pentosan polysulfate. Certainly recent research projects have given credibility to many of its anti-osteoarthritic claims and caused even skeptics to give it a closer second look, though clearly more clinically relevant research is needed. 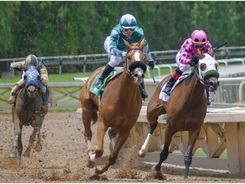 Learn About Suspension Technology in Saddle Pads for Your …