For most people, the concept of doping in athletics brings to mind shady dealings, illicit injections of illegal substances, muscle-bound athletes, and Congressional hearings.  We tend to think of doping in terms of giving a forbidden substance to a human or animal athlete with the intent of causing that athlete to perform beyond normal physiologic capabilities.  This may be why equine drug testing rules are so confusing to many owners.  Not only are there multiple regulatory agencies that oversee performance horses, but it can be difficult to verify the legality of medications that are routinely prescribed for normal medical conditions.

Always consult with your veterinarian before giving any medication or supplement to your horse.

This article will examine drug testing regulations in the non-racing performance horse within the United States.  This article is to be used as a guideline only and as a place to find sources for further information on drug regulation.  It is the exhibitorâs responsibility to be aware of any medications or supplements given to the horse and to be fully informed as to the admissibility of those substances under show regulations.

The FEI is the international governing body of equestrian sport.  While most equine events in the United States will fall under USEF or specific association rules, some higher-level dressage and jumping events are subject to FEI guidelines.

According to the FEI Clean Sport website, âEquestrian sport derives its credibility and public acceptance from the concept of fair play, the idea that the best athlete or team should win fairly and squarely, having competed under equitable conditions and under rules that are fair and applied evenly with true competence. To be valid and meaningful, competition results must be achieved on a level playing field.â  The USEF 2011 Guidelines for Drugs and Medications states that, âThe USEF Equine Drugs and Medications Rules are driven by a mission to protect equine welfare and to maintain a balance of competition among USEFâs 28 unique breeds and disciplines, while simultaneously recognizing and accommodating the varied differentiations required of each."

Although medication rules may seem arbitrary, the guidelines have been developed to ensure that:

While specific categories and definitions of substances contained within these categories may vary, most medications, supplements, and other drugs are listed under one of three headings used by both USEF and FEI.

In his article, âDrug Testing for the Equine Athlete,â in the Proceedings of the 2010 Kentucky Equine Research Nutrition Conference:  Feeding and Veterinary Management of the Sport Horse, Dr. A. Kent Allen writes, âForbidden medications and substances include those that may affect the cardiovascular, respiratory, or central nervous systems, or those that have a behavior-altering effect. This includes any stimulant, depressant, tranquilizer, local anesthetic, psychotropic substance, or drug that might affect the performance of a horse and/or pony including corticosteroids and analgesics.â

The FEI defines banned substances as âdoping substances, which have no place in equine sport.â  These are substances which have no recognized therapeutic benefit to the horse.  Some examples of banned substances include amphetamines, capsaicin, clonazepam, cocaine, dopamine, fentanyl, growth hormones, naloxone, morphine, pentobarbital, and fluphenazine.  These examples represent only a fraction of the comprehensive banned substance list.  A complete list may be found on the FEI website (see Figure 1 for link).  Note the following wording at the bottom of the FEI list:  âAnd other substances with a similar chemical structure or similar biological effect(s).â

Restricted medications are substances routinely used for therapeutic purposes in equine medicine but which are forbidden in competition.  Examples of controlled medications include acepromazine, carprofen, clenbuterol (Ventipulmin), diclofenac (Surpass), detomidine, DMSO, firocoxib (Equioxx), flunixin (Banamine), lidocaine, isoxuprine, pergolide, phenylbutazone, and tiludronic acid (Tildren).  As with the examples of banned substances, this list is nowhere near complete.  See figure 1 for link to the complete FEI list.

Non-steroidal anti-inflammatory drugs are arguably the most frequently used class of drugs administered to performance horses.  Most commonly used NSAIDs are classified under restricted/controlled use in FEI and USEF events.

USEF regulations with regard to allowable NSAID levels will change as of December 1, 2011.  From April 1, 2010 to November 30, 2011, a maximum of two of the following substances have been allowed to be present in the same plasma or urine sample (with the exception of flunixin and phenylbutazone, the two of which are forbidden to be present together in samples from the same horse):  phenylbutazone, flunixin, diclofenac, ketoprofen, meclofenamic acid, naproxen, and firocoxib.

After November 30, 2011, only the permissible levels of ONE of these substances will be allowed in the same plasma or urine sample under both USEF and FEI guidelines.

Note:  Where California Equine Medication Rule is in effect, both diclofenac and firocoxib are listed as prohibited substances.

Following wide-spread and highly publicized, non-therapeutic use in human athletics, the term âsteroidâ has become a controversial one; however, not all chemicals that fall into the steroid class are the same, and they can have both therapeutic and non-therapeutic uses.

Steroids can be divided into two categories.  Corticosteroids have anti-inflammatory, and sometimes anti-immune, properties, and are used medically to treat inflammatory conditions such as allergic reactions, auto-immune diseases, and the inflammation of joint disease.  Examples of corticosteroids are prednisone, dexamethasone, and betamethasone.

Anabolic steroids are most commonly used to build muscle mass and stamina and are the class of drugs often associated with steroid controversies in human athletic performances.  Anabolic steroids have been used routinely in horse racing for years; however, recent attention to the adverse effects of anabolic steroid use has brought to light potential concerns when using this category of drug in equine athletics.

It is important to note that most medication rules prohibit not only the presence of specific forbidden substances in the blood or urine of a competing horse, but also the metabolites of those substances or any substance with a similar mechanism of action.

This allows the regulatory bodies to control the use of âdesigner drugsâ that may not yet be on the commercial market.

âNaturalâ or plant-based supplements should be used with extreme caution in competition.  Many illegal substances (such as marijuana, opium, cocaine, and heroin) are plant derivatives.  Natural supplements, or so-called nutraceuticals, are not regulated by the FDA as drugs and levels of active ingredients are not consistently monitored.  Several common plant compounds appear on the FEI and USEF forbidden substance lists.

Drug regulations in equine competition fall under the auspices of several regulatory agencies and are frequently revised.  It is the duty of the âperson responsible,â most commonly the rider or driver of the horse, to understand the regulations for each specific event and to be aware of the current medication status of the horse.

The USEF says it best, âThe common thread that binds all of equestrian sport, however, is a dedication and commitment to the health, welfare and safety of the equine athlete, which must take precedence over all other aspects of training, competing and showing.â

Medication Lists and Other Resources: 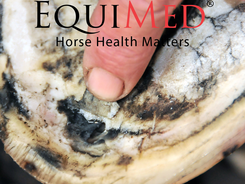