According to a Yiddish Proverb: “The wagon rests in winter, the sleigh in summer, the horse never.” The wisdom behind this proverb provides a major key to better horse behavior.

Although short daylight hours and icy cold temperatures during the winter time make daily exercise of horses more challenging, a basic understanding of how to keep your horse fit in cold weather is important now and for the future.

Horses don’t hibernate during the winter and confining them to stalls without proper exercise and work affects both behavior and health. The exercise that you give your horse will have a direct impact on his current behavior as well as fitness and performance for shows and other riding events come spring. 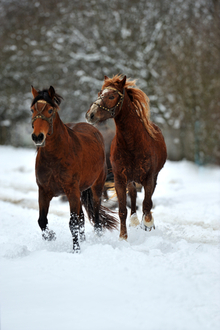 Horses pulling a sleigh through snow

Your horse will gain additional benefit from moving in snow since it requires him to pick up his feet more, plus moving in snow up to a depth of two feet offers excellent resistance training, and, as a bonus, the snow and cold decreases inflammation in the joints and tendons.

Most horses need regular exercise no matter what the weather is like, especially fit, young or excitable horses. Horses will often use bucking, spooking and other negative behavior to release built up energy if they are not exercised on a daily basis.

When starting out to exercise your horse during cold weather, rely on your common sense. If it feels painful to take a deep breath of wintery air into your lungs, it’s most likely too cold for your horse to be galloping around sucking in ice crystals.

Working in snow is great for your horse and he generally won’t have problems with traction, but avoid working on ice; If you can safely walk on the surface, your horse should not have of a problem with slipping.

According to Dustin Grams of Grams Horse Training, “I cut my lessons and training off when my thermometer in my indoor arena reads -20°C (-4F). Any colder is too hard on horses’ lungs.” Keep in mind this is indoors where there is no wind chill. If you are planning to ride outdoors, check your local weather forecast and take wind chill into account.

In addition, your horse will gain additional benefit from moving through the snow as it requires them to pick up their feet more. Riding in snow up to a depth of two feet offers excellent resistance training. As a bonus, the snow and cold decreases inflammation in the joints and tendons.

It is important to remember that horses will burn more calories during the winter to generate body heat and maintain their normal core body temperature. In all but the most extreme weather, the calorie needs of a horse generally rise 10% – 20% and it is important to feed your horse enough to supply the extra needed calories.

Before tacking up, check your horse’s feet for ice balls and packed snow and clean out the hoofs before doing exercise. Compacted snow, mud and ice can cause a hoof bruise, lameness and will make it uncomfortable for the horse to walk.

If there is compacted ice inside the hoof, you can carefully use a chisel to get it out. Chisels are a little sharper than hoof picks and will have an easier time getting the ice out. Cleaning out mud and manure will help prevent thrush from developing inside the hoof. 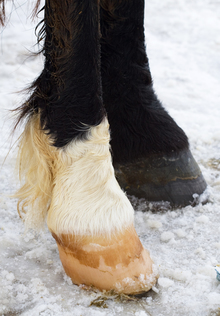 Check your horse’s feet for ice balls, packed snow, mud, and manure, and clean out the hoofs before exercising to prevent thrush from developing inside the hoof.

Also pay special attention to grooming your horse combining the grooming with a thorough check over of the horse to spot any potential problems with skin or hair coat. Grooming is also a vital part of your routine for it will help rev up your horse’s circulation and unclog any blocked pores allowing him to sweat.

The warming-up period becomes extremely important during cold weather. Allow enough time to get your horse's circulation going especially in the large muscle groups and lower extremities. Once your horse feels relaxed and sufficiently warmed up, then it should be okay to move to the jog or trot.

Most horses in colder climes will naturally grow a very thick winter coat that traps in a cushion of air to keep them warm, even when it is snowing. A horse that is in normal health has a natural thick winter coat, lives outside, does not need blankets while turned out, as long as there is an area for protection from precipitation, and won’t need sheets or blankets while warming up, cooling down, or working.

If you have a clipped horse, in temperatures above about 20 degrees, they will remain comfortable as long as they have adequate food. For clipped horses below 20 degrees, the horse will benefit from a quarter-sheet while starting the warm-up or cool-down.

If you are working outside with a shod horse, use caulks or borium for traction on the ice and snow. Or use rim pads that prevent snow from balling up in their feet.

Whenever possible, it is best to remove the shoes during the winter to allow proper circulation to the feet and the horse has much better traction being barefoot rather than shod. Working in snow is great for your horse and he generally won’t have problems with traction, but avoid working on ice; If you can safely walk on the surface, your horse should not have of a problem with slipping.

Once you have groomed and warmed up your horse, you are now ready for one of the most important parts of your horse's day.

In the original study, Dr Raf Freire and his co-workers looked at how stabled horses behaved when they were given an hour's exercise a day compared with no exercise.1

An important aspect of the study was that each horse acted as its own control in matched treatments. This allowed the researchers to separate the effects of exercise from other effects associated with the exercise treatments.

Some horses used a walker, others a treadmill, while another group had free turnout, and a fourth group of horses was ridden.
© 2015 by Centaur

On the days when they were not exercised, horses were taken out of their stables for an hour for a change of scenery, but no exercise as such. So, for example, horse walker exercise was compared with standing on a stationary horse walker.

For the research study, two dozen horses, including thoroughbreds and part-thoroughbreds, received an hour of exercise daily with one of the four methods. Some horses used a walker, others a treadmill, while another group had free turnout, and a fourth group of horses was ridden.

Every few days, each horse's behavior was evaluated while being handled for weighing and then while loading in and out of a trailer.

Each horse was also released on its own into an arena for 15 minutes while its activity was documented to assess rebound behavior.

The researchers considered rebound activity as an indicator of the horse's previous behavioral deprivation, resulting from being confined to a stall four meters (13 feet) square. For comparison, during another period when the same horses went without daily exercise, they received the same behavior assessment routine.

Tracking recovery rates can be very helpful in judging the progress of fitness. Taking a horse's heart rate right after exercise and then rechecking it at five minute intervals will tell you how fast a horse is getting back to resting rate.

The researchers observed that horses given daily exercise did less walking, trotting and cantering when let loose in the arena, even when the exercise only consisted of walking.

Those horses that had turnout did the least amount of cantering, and seldom bucked or rolled during their freedom in the arena.

Horses exercised by walking or riding usually bucked two or three times while in the arena. This difference suggests that turnout was the most effective exercise regime. Meanwhile, horses without any daily exercise let out six or seven bucks and also rolled once or twice during their 15 minutes at liberty.

All types of exercise left horses in a more cooperative and less reactive mood. This was reflected in less vocalizing while being handled and in taking less time to load onto weight scales. Whether they got exercise made no difference, however, in how horses behaved during trailer loading.

Unwanted behavior did not occur often, but for ease of recording was classified as either "dangerous" including bolting, rushing in or out of scales or trailer or "unwelcome" undesirable or uncooperative behaviors not considered dangerous.

During the study, three instances of dangerous behavior occurred, showing that it does happen even with experienced handlers. However, the numbers of incidents was not enough to allow statistical analysis.

The researchers concluded that providing stabled horses with one hour a day of exercise on a walker, treadmill, turn-out or being ridden are all effective in providing for the general exercise needs of stabled horses, and is likely to provide positive effects on horse welfare, training ability and handler safety."

While this study doesn't indicate whether one hour of exercise is ideal or even enough for a stabled horse, it does show that an hour of activity makes a significant difference in a horse's behavior. The greatest benefits come from allowing horses free turnout, rather than providing exercise with just a walker, a treadmill or by riding, and freedom in a field is often the best kind of exercise for a horse.

Whatever form of exercise you choose for your horse's daily workout, it is important to be consistent in maintaining the daily schedule. Irregular exercise predisposes some horses to "tying up" and injuries can occur when a horse is given time off and then brought back into a full daily workout program without time for retraining.

Horse Rhythms and Movements from Walk to Gallop and in Between

My mare pins her ears when approached. What can I do to put …