Recognizing a horse in shock

Just as humans go into shock when the circulatory system fails to meet the body's need for oxygen, equines, too, can go into shock.

This life-threatening condition occurs when the body does not get sufficient blood flow to provide necessary oxygen to the brain and major organs.

Equines are subject to 5 major classes of shock:

Typically, an equine that is in a state of shock will appear anxious or agitated, have low or no urine output, may have diarrhea, have a rapid, but weak pulse accompanied by shallow breathing, will sweat profusely and show signs of confusion.

As the vital organs shut down because of lack of oxygen, the horse may lose consciousness and without immediate treatment may die.

First aid treatment for the horse in shock

Once the horse is stabilized, your veterinarian will determine the root cause for the shock.

In most cases, the cause will be apparent, but in cases of severe infection, damage to the nervous system, or foal septicemia further evaluation will be needed.

Anaphylactic shock in the horse

Cases of systemic anaphylactic shock usually require immediate diagnosis and treatment since the outcome depends on how quickly treatment is initiated.

In cases of anaphylactic shock due to an acute hypersensitivity to an allergen, administration of epinephrine solution intravenously through the jugular vein or intramuscularly or subcutaneously is called for.

Administration of additional epinephrine every 15 minutes is necessary, and, if time permits, the veterinarian may establish a permanent IV line for additional medications and large volumes of fluid to support the horse's circulation.

Injectable corticosteroids and an antihistamine such as pyrilamine maleate may be given in cases of a mild local reaction and may be useful in a severe reaction as a complement to other medications and treatments.

Any horse that has had an allergic reaction with itching swelling, hives or other signs of systemic anaphylactic reaction such as anxiety, difficulty in breathing, sweating, drop in blood pressure or other symptoms should not be exposed to the allergen in any form again, if at all possible.

Multiple bee stings, penicillin antibiotics, vaccines and immune serums are some of the most common causes of anaphylactic shock.

If you know that you have a horse that is susceptible to anaphylactic shock, ask your veterinarian to supply you with a drug such as epinephrine used for emergency treatment and teach you how to use it effectively in case of an emergency. 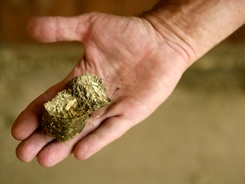 Recognizing and Dealing with Respiratory Distress