For whatever reason, many dogs love to eat horse manure. In most cases, this rather repulsive habit is mostly an issue for the dog owner and does not lead to harm for the dog. A concern expressed by many dog owners is that a dog may become poisoned if the manure comes from a horse that was recently administered a common deworming agent, ivermectin.

I decided to do a bit of research to determine if this is a concern that is important to pass on to our EquiMed visitors. This is what I found.

Is ivermectin dangerous for dogs?

Indeed it is. Ivermectin is very toxic to dogs if consumed in amounts sufficiently high to cross the blood-brain barrier. In these cases, it can cause neurological symptoms including:

Even with the potential for these nasty side effects, Ivermectin is commonly administered to dogs in the proper dose level to treat heartworm, sarcoptic mange and demodectic mange. The important factor is making sure the dog does not consume what your veterinarian would call a concentration required to produce signs of toxicosis.

There is an additional consideration having to do with dogs that have a mutation in the gene known as the multidrug resistance gene (ABCB1). These dogs are especially sensitive to ivermectin. If your dog is one of the following breeds, there is the potential that he or she may have the mutation:

These breeds have a much higher sensitivity to ivermectin. Most veterinarians avoid using ivermectin in these breeds, except for heartworm treatment, where the required dose is low enough to not cause toxicosis.

How much ivermectin can my dog consume without causing a toxic reaction?

Obviously, it is smartest to avoid any consumption of ivermectin except as part of a veterinarian administered and monitored treatment. But inadvertent consumption or exposure to ivermectin will generally not be toxic in amounts less that:

How much ivermectin is passed in the horse's manure?

Research on equine parasite control has resulted in a standard dose of oral ivermectin of 0.2 mg/kg. Paste dispensers are normally calibrated to help measure the proper dose based on your horse's body weight.

Testing horse manure for ivermectin concentrations is not a job most people would enjoy, however researchers Perez, Cabezas, Sutra, Galtier and Alvinerie from the Facultad Medecina Veterinaria took the challenge and scientifically quantified the amount of ivermectin passing through the horse's digestive tract and made available to our hungry dogs in the form of manure.

A concern expressed by many dog owners is that a dog may become poisoned if the manure comes from a horse that was recently administered a common deworming agent, ivermectin.
© 2017 by Val

An important result of the research is that the level of ivermectin in the manure peaks 2 and 1/2 days following standard treatment. After three days, the amount of ivermectin passed through the manure is too low to cause a problem with your dog.

At the peak, the researchers found a concentration level of 2414 plus or minus 1894 nanograms of ivermectin per gram of manure. Is this level enough to cause a problem for our manure eating dog? We need to do some basic math to find out.

How much horse manure is too much?

Just to be safe, we will work on a worst case scenario and assume that your dog has the ABCB1 mutation and is sensitive to ivermectin at levels of 100 micrograms per kilogram of body weight. We also use the worst case concentration of ivermectin noted in the study which is  4308 nanograms of ivermectin per gram of manure.

Remember that this level of concentration may be present in manure at 2 and 1/2 days after ivermectin treatment. The following table shows how many pounds of manure your dog would need to consume to be considered a toxic dose:

If you own a breed or a mixed breed that carries the ABCB1 mutation, your dog can become poisoned by eating horse manure contaminated with ivermectin. The manure must be eaten within 4 or 5 days of the horse being treated with an ivermectin! A 60 pound dog would need to consume 1.4 pounds of manure to receive a potentially toxic dose.

What is a road apple?

When horses eliminate their bowels, the form of the manure is a pile of rounded balls. In the early 20th century, when horses were the predominant means of transportation, the collection and disposal of "road apples" was a major task of city workers.

How much is 1.4 pounds of manure? I collected road apples from my quarter horses (a relatively small breed) and weighed them to find that to consume 1.4 pounds of manure, the dog would need to eat a pile of approximately 14 balls, a good sized pile of manure.

A very small dog or puppy of 5 pounds, with the ABCB1 mutation would only need to eat 2 balls balls to receive a toxic dose. Fortunately, most breeds that have this mutation tend to be larger - so puppies are most at risk.

Another important consideration is administering a heart worm medication. Since these medications commonly contain ivermectin, even a small amount of ivermectin contaminated manure consumed by your dog may cause toxicosis if taken within days of a heartworm treatment.

If you own a breed that does not carry the ABCB1 mutation, it is difficult for your dog to consume enough manure to become ill. A 60 pound dog would need to consume 28 pounds of manure. This is beyond the capability of even the most hungry dog, so the chances of toxicity are slim. However, with continuous exposure the manure from treated horses, it may be possible to accumulate a toxic dose over a period of time.

Prognosis for dogs with ivermectin toxicosis

If your dog develops ivermectin toxicosis, immediate veterinary assistance is required. While there are no antidotes to ivermectin toxicosis, with proper supportive care, the prognosis is usually very good. Depending on the amount consumed, treatment may require hospitalization for a prolonged period. For a non-sensitive dog, after the ingestion of amounts greater than 5 mg per kg of body weight, the dog may not survive.

The analysis presented in this article was drawn largely from the following two publications. Consult with your dog's veterinarian if you suspect or are worried about ivermectin toxicosis. 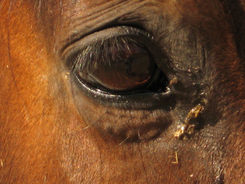 Your Bleeding Horse - What to Do

First Aid for Sprains and Strains in Horses