Equine parasites are with us every day of the year, as they lay eggs that hatch into larvae that turn into adult worms that start the process all over again. Horses become infected with parasites in pastures, barns, in and around streams and on trails.

During their passage through the horse's system, worms injure organ systems and create problems that lead to anemia, diarrhea, weight loss, nutritional deficiencies, and other conditions that jeopardize the life of your horse.

In addition, researchers estimate that worms are a predisposing factor in 90 percent of cases of intestinal colic.

Fortunately, dewormers rank very high in medical advancements made over the last few years, and horses, in general, are healthier as a result. When things go well, it's easy to become complacent about the routines that have taken us this far. Don't let that happen to you when it comes to the important strategies of an effective deworming program.

The most common worms that are destructive to your horse's health include:

What Is the Best Deworming Program for My Horse?

First, you need to choose a schedule. For the most part, horse owners have had two deworming programs to choose from in the past. Do you want to put your horse on a "purge" or interval program, or give a daily dewormer with the horse's feed or do you want to go with the latest recommended deworming program - strategic deworming? Your veterinarian can help you determine what kind of schedule and which deworming products will work best for you and your horse in your particular circumstances.

A "purge" or interval program works by breaking the cycle in the parasite's life, essentially killing the adult worms before they can lay eggs. By reducing the number of eggs, the exposure to parasites is minimized, unless the horse is pastured or around other horses that are on less-than-effective deworming programs.

A daily program works by killing the early-stage larvae your horse gets in his mouth before they penetrate body tissues. By killing the larvae before they begin migrating, internal parasite levels are minimized, even if the environment is heavily infested or out of your control.

Every horse needs to be dewormed routinely, right?  Isn’t it cheaper to buy a tube of dewormer than to have a horse checked for parasites by the veterinarian?  Not necessarily.

Recent research has shown that approximately 20% of horses shed 80% of the parasite eggs found in a pasture.  What this means is that if we deworm every horse every six weeks, we are drastically over-treating many horses, and under-treating some.  Factor in the growing threat of drug resistance, and we are setting ourselves up for parasite control failure.

Each of these arms of a strategic deworming program requires collaboration with your veterinarian.  Your veterinarian can perform a test called a fecal egg count on a sample of your horse's manure to quantify the number and types of parasite eggs being shed.   A quantitative analysis (one that gives a number) allows horses to be categorized as high, medium, or low shedders.  It is important to bear in mind that horses will shed different levels of eggs depending upon the time since last deworming treatment and the stage of the parasite lifecycle.  Therefore, this test should be repeated periodically.

The Fecal Egg Count Reduction Test allows you and your veterinarian to learn the efficacy of the classes of dewormer on the particular parasite population of your ranch. By measuring the fecal egg counts of each horse immediately before, and 14 days after, treatment with an anthelmintic drug, your veterinarian can evaluate the degree to which treatment with that drug reduced the parasite load, and whether that drug is effective against a particular parasite on your ranch.

By not routinely deworming every horse at an arbitrary frequency, strategic deworming reduces the frequency of exposure of a parasite population to a given drug and therefore provides some protection for a population of refugia.

Knowing which horses are shedding the largest numbers of parasites, what parasites are common in your horse population, which drugs are most effective against those parasites on your ranch, and how your climate affects parasite lifecycles will give you and your veterinarian the tools to protect your horses from parasitic disease.

Whether you and your veterinarian choose a purge program, a daily deworming program, or a strategic deworming program, you will need to take steps to target the other parasites that are not adequately controlled with your chosen program. These include bots, tapeworms, and encysted small strongyles.

What Classes of Drugs Are Effective Deworming Agents?

The three classes of anthelminic or parasiticide drugs are Benzimidazoles, Macrocyclic lactone, and Tetrahydro-Pyrimidine. Each has strengths and weaknesses, and it is necessary to switch deworming agents periodically to prevent the worms from becoming immune to one dewormer. Also, different formulas kill different kinds of worms, so it's important to rotate the dewormers to be sure to kill all kinds of worms.

The active ingredient in Benzimadazoles drugs is Fenbendazole in brands such as Panacur and Safe-Guard, which come in paste, granulated, and suspension forms, for administration every 6 - 8 weeks. Febendazole is effective in treating large and small strongyles, ascarids, and pin worms.

Oxfendazole is another Benzimadazole drug that comes under the brand nameBenzelmin. Benzelmin comes in a paste to be given every 6 - 8 weeks. It is effective against large and small strongyles, pinworms, and ascarids.

Oxibendazole is the active ingredient in a third Benzimidazoles drug that comes in a paste, granulated, or in suspension form under the brand name Anthelcide EQ to be given every 6 - 8 weeks. Anthelcide EQ is effective against encysted small strongyles, large strongyles, ascarids, and pinworms.

In the Macrocyclic lactone drug class, Avenectin and Ivermectin are the active ingredients in brands such as Zimecterin, Rotectin, Eqvalan, and Equimectrin, which come in a paste form for administration every 6 - 8 weeks. Eqvalan also comes in a liquid form. These products are effective in treating large and small strongyles, pinworms, ascarids, threadworms, lung worms, hair worms, and Draschia Habronema.

In the Tetrahydro-Pyrimidine drug class, pyrantel tartrate and pyranthel pamoate are the active ingredients. Pyrantel tartrate is the basis of daily feed dewormers and is available in the brand, Strongid C, which comes in a pellet form to be given daily. It is effective against large and small strongyles, ascarids, pinworms, and also helps decrease pasture contamination.

Pyranthel pamoate is available in brands such as Strongid P and Rotectin 2, both of which come in paste form to be given every 6 - 8 weeks. It is effective against large and small strongyles, pinworms, and kills tapeworms in double-doses.

Unfortunately, these products are ineffective against bots and most of them allow parasite reinfestation between dewormings.

Bot treatment should be given in late fall in most areas, with another treatment recommended at the beginning or middle of the hot season. Organophosphates and ivermectin are the anthelmintics of choice because they are effective against both the mouth and stomach stages of bot infection. Horse feed supplements containing stirofos, an organophosphate, can be given to kill bot larvae in the stomach.

Tapeworms pose special problems because they are difficult to identify in fecal examinations. Deworming for tapeworms is recommended at least annually, and where infestations are common, biannually, with a product containing praziquantel, such as Zimectrin, Equimax, or a double-dose of pyrantel pamoate.

Larvacidal deworming focuses on killing encysted small strongyles and is a very specific deworming procedure. Administering twice the usual dosage of fenbendazole for horses once a day, for 5 consecutive days, has been shown to be effective. Currently, fenbendazole is the only FDA-approved product to treat all stages of encysted small strongyles in horses. Fenbendazole is marketed under the names Panacur and Safe-Guard.

DO NOT give any horse, foal, or pregnant mare a larvacidal dose of dewormer without consulting your veterinarian. To do so could result in death or severe illness.

At times, a horse will act as if it doesn't feel well after being dewormed and will become lethargic. Several theories are suggested as to the cause of this, such as a reaction to a heavy parasite load being killed, or the emergence of large numbers of encysted small strongyle larvae stressing the horse's system. If your horse is lethargic or shows symptoms of illness after deworming, check with your veterinarian as to possible causes.

In general, deworming agents will never be completely effective in ridding a horse of parasites because of the continuing problem of reinfection, the impossibility of killing all parasites as they go through different stages or become encysted, and the development of drug-resistant worms, especially in the case of small strongyles that have become resistant to the drug class, Benzimidazoles.

For effectiveness, environmental control of parasites must be an integral part of your deworming management program.

Get Rid of Parasites Before They Become a Problem

The American Association of Equine Practitioners has compiled ;a list of environmental ways to get rid of parasites:

Other helpful ways to assure the success of your deworming program, include:

A thorough deworming program, combined with environmental control, will go a long way toward making sure your horse's health, appearance, performance and comfort are maximized in every way. 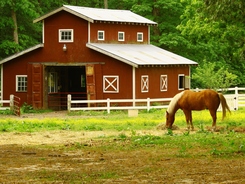 What Every Horse Owner Should Know About Caring for Senior …