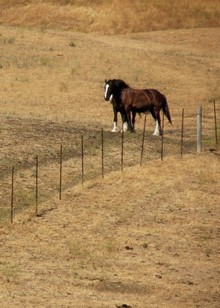 The nutritional value of forage and hay grown in drought-stricken areas plummets and as a result, horse nutrition is compromised.

With droughts in the West and other areas and wildfires sweeping through Oregon, Washington and Alaska, the dangers associated with drought season have become devastatingly clear to horse owners. Thousands of horses have been evacuated to avoid wildfires in Washington State and Oregon and across the West.

The Alaska mega fires have helped make this an unprecedented wildfire season. Fires raging across the American West have set records for size and property damage, badly stretched firefighting resources have cost the lives of firefighters and burned thousands of acres.

So far this year, according to the National Interagency Fire Center, eight million acres have burned nationwide, well ahead of the past decade's average of five million at this point. And states such as California still have a couple of months to go in their typical fire season.

Two underlying conditions have stoked these fires: a western drought that's stretching into its fourth year and high temperatures that are unprecedented - 2014 was the warmest year on record, and so far 2015 has proved even hotter. The result has been a tinder-dry region unusually vulnerable to lightning strikes or human-caused fires.

At least nine states in the US are heavily impacted by drought conditions including Washington, Oregon, California, Arizona, Nevada, New Mexico, Texas, Kansas and Oklahoma. Weather scientists are predicting that droughts in the U.S.. Southwest and Central Plains during the last half of this century could be drier and longer than drought conditions seen in those regions in the last 1,000 years.

Why are droughts so devastating to horse health?

Not only is finding good quality hay more difficult during a drought, but the nutritional value of hay grown in drought-stricken areas plummets and as a result, horse nutrition is compromised. Horse owners need to carefully evaluate the quality and quantity of hay provided, as the drought makes high-quality hay harder to find.

Horse owners often mistakenly believe that the risk of colic and laminitis is decreased when grass is no longer springtime-lush. Thatâs not actually true, as fructan levels are actually higher in mature grass.

Higher levels of these sugars can upset the balance in the hindgut, leading to hindgut acidosis, laminitis, and colic. Fructan levels are highest in the afternoon on sunny days, so try to move your horse into pastures with shorter grass where the fructans are lower.

It's imperative to keep your horse's GI tract healthy so that he can get the most out of lower-nutrient grass. Good GI health aids natural immunity to help horses deal with less-than-idea conditions from the inside out, so be sure to feed a high-fiber diet, and try to cut out hard-to-digest grains.

A thorough deworming program, combined with environmental control, becomes more important during drought conditions, and will go a long way toward making sure your horse's health, appearance, performance and comfort are maximized in every way. 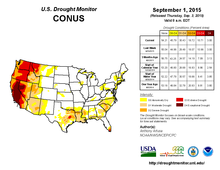 Drought map of the US

Droughts and wildfires can be devastating to horses because they affect their well being with changes in habitat, diet, transport, and other changes in lifestyle that can lead to digestive problems and unhealthy levels of stress.
© 2015 by Anthony Artusa

In addition to following your deworming schedules it is important to manage your pasture to manage parasites. Eggs are passed in manure and parasitic infestation is primarily an issue of horse environment and habit. Horses tend to leave manure piles in one area while grazing in another. Their instinct to eat away from manure piles builds in natural worm control but results in uneven grass growth.

Dragging pastures, which spreads worm eggs around, and cutting the grass to improve pasture appearance can result in larger quantities of larvae and eggs being ingested by grazing horses.

Although hot weather makes it uncomfortable, it works best to drag pastures during hot afternoons when larvae have crawled back down to the soil level where exposed larvae will be quickly killed by heat.

Don't forget that twice-yearly dentistry is essential to overall health, as chewing the grass thoroughly aids in nutrient absorption and produces the saliva that helps break down food and buffer the acids in the stomach. This becomes more important when hay quality is not the best and the horse is eating coarse, dry forage.

In addition protect horse health during drought conditions by

Be prepared - Protect horses from wildfires and all fires

In many areas, drought conditions combined with strong winds and triple-digit heat have sparked a particularly devastating wildfire season. In Alaska, nearly 5.2 million acres of Alaskan land have been devastated by wildfires this summer - more than any past year on record except 2004.

According to the National Interagency Fire Center, more than 8 million acres have burned in U.S. wildfires in 2015. That is an area larger than the state of Maryland.

A veterinarian can help determine the difference between a reactive airway from smoke and dust versus a bacterial infection and bronchitis or pneumonia. If your horse has a history of having heaves or recurrent airway problems, there is a greater risk of secondary problems such as bacterial pneumonia when a horse is exposed to the toxins in smoke from fires.

And the numbers are still growing: 65 large fires are currently raging across the country, particularly in California, Oregon, Washington, Idaho and Montana. That includes three Washington state fires or fire complexes that are larger than 100,000 acres burned.

Although many horse owners will not have to deal with the threat of a wildfire, other fires including barn fires may take their toll, so having a plan of action in case of any fire is a most important priority when it comes to disaster preparations.

As USRider maintains in its Wildfire Preparedness article, evacuation plans and shelter-in-place planning should be a part of a horse owner's annual review of disaster mitigation strategies.

Be sure to have a shelter-in-place plan in case the animals cannot be evacuated. Animals should not remain in barns during wildfires. Instead, they should be housed in a pasture in which all combustible vegetation has been removed. Water and forage should be provided, and each animal should be properly identified.

Avoid synthetic (e.g., nylon or plastic) halters or lead ropes that may melt and cause serious burns to the horse or the handler. Never use nylon sheets, fly masks, or other synthetic tack or equipment during a wildfire. Very few items of horse clothing are fire retardant.

According to Rebecca Gimenez, Primary Instructor and President for Technical Large Animal Emergency Rescue, "Normally it is not the flames of a wildfire that will cause you and your horse to need to evacuate; it is the thick black smoke filled with toxins and poor air quality that impact you well before the flames get to your location from many miles away depending on environmental factors (humidity, wind direction, speed, etc.)." 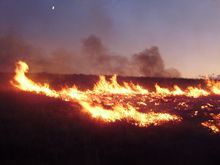 Flames - Not the only horse health threat

According to Rebecca Gimenez, Primary Instructor and President for Technical Large Animal Emergency Rescue, Normally it is not the flames of a wildfire that will cause you and your horse to need to evacuate; it is the thick black smoke filled with toxins and poor air quality that impact you well before the flames get to your location.
© 2015 by Famartin

When choosing to live in an area subject to wildfires, barns should be designed with wildfire and fire safety in mind: open ventilation, frost-free hydrants, and 33m minimum defensible space around each structure allows fire crews to protect it from falling cinders and direct flames. www.firewise.org

Tile roofs are relatively able to resist flame spread from these cinders, versus shake and composite roofs, which are more vulnerable. However, tile roofs are not the typically budget-friendly choice for barns.

It is usually the windblown cinders (partially burned materials such leaves, paper, lightweight duff) that cause facilities to catch on fire before the flame front actually reaches the property. These can be blown in from hundreds of yards or even miles away. Consider using Fire wise plants in your landscaping.

While there are no fireproof plants, some catch and spread fire more slowly so are much safer. Avoid landscaping with mulches made of combustibles, plants that easily catch on fire, and putting plants too close to buildings. Your local extension service can provide a list of Fire wise species.

Teaching animals to be reliable loaders in horse trailers or transportation equipment is an excellent prevention mechanism to facilitate evacuation. Identify an alternate place to put animals so youâre not trying to decide what to do as you lead them out of the barn. For regional wildfire disasters, have an evacuation facility in another state where you can take the animals.

Practice your evacuation plan to find any weaknesses. Work with the local fire department since they are the professionals that can point out individual problems to consider with prevention.

Have horses checked after exposure to fire and smoke

Be sure to consult a veterinarian immediately following an animalâs exposure to flames and smoke. Toxins released by the process of burning cause severe damage to the lungs of any living organism. Carbon monoxide and carbon dioxide are common byproducts of fires and when inhaled, block the absorption of oxygen at the level of the hemoglobin in the blood, causing asphyxiation through anoxia.

Flames do not necessarily need to be visible for this to occur. Animals removed from wildfire-affected areas may appear medically stable for days, then crash with severe pneumonia. 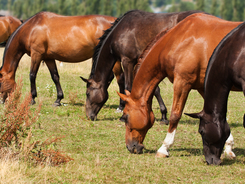 Caring for Your Horse - Tools of the Trade

How Do I Know My Horse Is Colicking …