The equine endocrine system is a collection of small organs that produce hormones that travel through the bloodstream to distant sites in the body. These hormones act to regulate metabolism, growth, reproduction, sweating, stress response, and much more.

Directed by signals originating in the brain in response to an outside stimulus, hormone production is tempered by positive or negative feedback loops that increase or decrease production respectively. 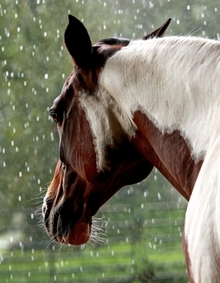 This vital system regulates many of the horse's body functions.

While endocrine disease in horses is much less common than in man or dogs and cats, alterations in the function of these organs can lead to significant hormone imbalances and clinical dysfunction.

The pituitary gland is located on the floor of the calvaria (skull) and is connected to the hypothalamus in the brain by blood vessels and nerves. This grape-sized organ can be divided into three sections, the pars nervosa, the pars intermedia, and the pars distalis.

The hormones produced by the pituitary have a variety of functions from metabolism to reproduction. The most well known function of the equine pituitary is the production of adrenocorticotropic hormone (ACTH) by the pars intermedia. ACTH acts directly on the adrenal glands to stimulate the production of steroids, most notably cortisol in response to stress.

It is the dysfunction of this portion of the pituitary that causes Equine Cushing’s Disease, known in the veterinary community as Pituitary Pars Intermedia Dysfunction (PPID).

The pituitary can affect metabolism and growth through its secretion of thyroid stimulating hormone (TSH), which acts on the thyroid gland, as well as growth hormone (GH), which alters metabolism and builds muscle.

Anti-diuretic hormone (ADH aka: vasopressin) is produced by the hypothalamus and stored and released by the posterior section of the pituitary. Acting in response to hypotention (low blood pressure), ADH signals the kidneys to retain sodium and thereby retain water to raise blood pressure.

The reproductive cycle is also influenced by pituitary hormones. Follicle stimulating hormone (FSH) and luteinizing hormone (LH) act on the ovaries in mares and the testes in stallions. In mares, FSH stimulates the development and maturation of the follicle leading up to ovulation. In males, FSH aids in sperm maturation. LH plays a major role in the production of sex hormones such as testosterone and estrogen in both sexes.

The adrenal glands are roughly 5-inch long, 2-inch wide oblong structures that sit on the cranial pole of each kidney. Though small in size, the adrenals play a very large role in metabolism, behavior, and stress.The glucocorticoids - cortisol, cortisone, and coricosterone - regulate protein, fat, and mineral metabolism.

More importantly, these hormones have a tremendous anti-inflammatory effect on the immune system, which is why cases of Equine Cushing’s Disease show signs of poor immunity like chronic dermatitis, foot abscesses, and poor wound healing.

Like many bodily functions, there are multiple pathways to regulate blood pressure and reproductive pathways. Aldosterone, produced by the adrenals, also regulates sodium levels, water balance, and blood pressure.

The kidney also partially acts as an endocrine organ in this pathway by producing renin, which, through the renin-angiotensin system, stimulates aldosterone production by the adrenals.

Gonadocorticoids, also produced by the adrenals, act on sperm production in stallions and affect reproductive behavior in both sexes.

Pheochromocytomas, tumors of the adrenal gland that cause severe anxiety, sweating, and rapid heart rate, are extremely uncommon, and while anhidrosis, the inability to sweat, is often blamed on adrenal dysfunction, this has not been proven.

The thyroid gland straddles the trachea just behind the larynx. It is much more pronounced and active in growing foals and is often difficult to palpate in adult horses. This gland concentrates the iodine in the body and produces thyroxine (T4) and the more metabolically active triiodothyronine (T3) in response to TSH from the pituitary gland.

In all ages, thyroid hormones play a role in protein synthesis and breakdown, increase body heat production in times of prolonged cold weather, and set basal metabolic rate. Calcitonin is also regulated by the thyroid gland and is involved with calcium homeostasis between the bone and the circulation.

True thyroid dysfunction in horses is rare, though commonly misdiagnosed. Free and bound circulating levels of thyroid hormones can be altered by more than just thyroid dysfunction and are often affected by other disease states, poor nutrition, or even reproductive cycles.

In order to assess the function of the thyroid gland your veterinarian should perform a thyrotropin releasing hormone (TRH) stimulation test where TRH is administered and the thyroid gland’s response is measured.

Some older horses will develop what appears to be an egg-like mass that intermittently protrudes from behind the larynx, above the trachea. This is almost always a normal thyroid gland that becomes visible as collagen in connective tissue weakens with age.

The parathyroid glands are two sets of organs associated with the thyroid gland, and in the horse are also found in discrete clusters in other areas. The chief cells produce parathyroid hormone (PTH) whose main function is to regulate calcium levels in the body.

PTH can stimulate osteoclasts to resorb bone, releasing calcium into the bloodstream. It also can act on the kidneys to retain calcium and release phosphorous into the urine.

While primary parathyroid gland dysfunction has been reported in horses displaying signs of severe hypocalcemia, secondary hyperparathyroid dysfunction (Bran Disease or Big Head Disease) is more commonly recognized in horses receiving a diet that has an inappropriate calcium and phosphorous ratio, such as an all bran diet, and is not a direct cause of parathyroid disease.

The pancreas lies within the abdominal cavity adjacent to the duodenum (the first segment of the small intestines). As an endocrine organ, it is responsible for the production of insulin and glucagon. Insulin aids in the transport of glucose into cells to be used for energy. It is the primary regulator of blood sugar levels.

Glucagon also modulates blood glucose levels by drawing glucose out of storage when blood sugar is low. The other main function of the pancreas is the production of enzymatic juices secreted into the small intestine in order to digest feed material.

With respect to digestion, the stomach and duodenum could be considered endocrine organs as they produce gastrin and secretin respectively to stimulate gastric and pancreatic secretions.

Pancreatitis is rare and difficult to diagnose in horses, though common in dogs after dietary indiscretions involving fatty foods. It can be seen secondary to systemic bacterial infections, migrating parasites, or some medications.

While insulin resistance (IR) is a common occurrence in horses as a component of Equine Metabolic Syndrome, it is not due to pancreatic dysfunction. IR in horses happens when the receptors on the cell surface fail to respond to circulating insulin and not because of the ability of the pancreas to produce insulin.

The gonads, ovaries in mares and testes in stallions, are endocrine organs producing sex hormones such as testosterone, estrogen, and progesterone. Both male and female equids produce all sex hormones, but the concentration of each hormone produced is based on gender, with stallions obviously having much higher levels of testosterone and mares producing more estrogens.

These hormones not only regulate the reproductive cycle in mares and sperm development in stallions. They also contribute to the feminization or masculinization of foals as they develop and drive sexual behavior.

Gonads more often display dysfunction in the form of low hormone levels affecting the reproductive ability of the horse. Occasionally, tumors of the ovaries or testes can produce an excess of reproductive hormones, causing altered behavior in mares and deleterious effects on semen quality in stallions.

While the endocrine system in horses is joined by the common theme of hormone production to maintain the homeostasis of life through support of development, metabolism, and reproduction, you can see that each organ has a multitude of functions affecting a wide variety of metabolic pathways throughout the body. 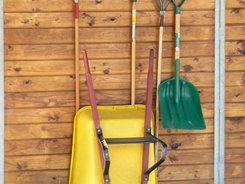 Spring into Summer: 10 Tips for Your Horse Part 2

How to Handle Your Horse When the Veterinarian Visits