A new study recently published in the Journal of Equine Veterinary Science evaluated the influence of shoeing and other risk factors such as age, access to paddock and breed, on heel contraction in horses. 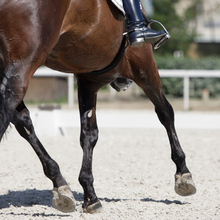 Metal shod hooves of a sport horse in action

The aim of their study was to investigate the influence of metal horseshoes on heel contraction and to evaluate other risk factors (housing, age, breed, and sex) for this condition.

Metal shoes as cause of contracted heels?

The clinical importance of heel restriction in shod horses had not been investigated, although some veterinarians and farriers suggest that shoeing horses with metal shoes does lead to heel contraction.

Metal horseshoes are often blamed for causing heel contraction, especially by natural hoof care practitioners, but no scientific comparison has to date been made focusing on shod and barefoot horses. 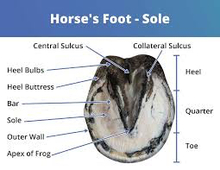 A number of earlier studies reported that the traditional horseshoe restricts the heels movement. In feral horses, contraction has been reported to affect around 8% of horses. However research on domestic horses, has reported incidence of contracted heels as high as 100% in the forefeet of certain small groups of horses.

This new study included 114 horses, 55 of which had always been barefoot, and 59 that had been shod consistently for at least the previous year.

Horses included in the study, were considered to be sound by their owners or riders and were at least three years old. Younger horses, were not included in the study, because it is uncommon to shoe horses below the age of two years. Thoroughbreds were excluded because all available horses of this breed were shod.

Examined horses were used as school-riding horses, pleasure horses, and sport horses; some of the horses were retired; however, the type of their previous work was not noted.

At the beginning of the study, the width and length of the frog of each horse were measured. Linear mixed-effects models were performed for the width:length ratio where the fixed effects were: age, sex, breed, pasture/paddock time, shoeing and its duration and limb. The random effects included the horse and the yard where the horse was kept. 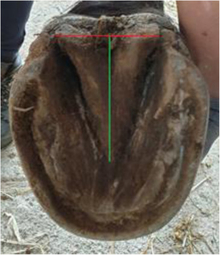 Horse hoof showing frog measurements; the heels of this specimen are not contracted

A new study evaluated the influence of metal shoeing and other risk factors such as age, access to paddock and breed, on heel contraction in horses.
© 2019 by ScienceDirect New window.

The data obtained during the study show that the most important factors for hoof contraction were attributes of the individual horse. This may mean that hoof contraction may be affected by features, which were not measured, for instance, genetics, weight, the environment in previous yard, or another characteristic of hoof morphology, such as the toe length or palmar angle, the latter of which has been previously implicated, whereby a high palmar angle is correlated with a narrow frog.

The statistical analysis showed a positive relationship between shoeing and heel contraction, when determining only the effect of this factor. This reflects previous anecdotal reports which stress that shoeing is a large risk factor for hoof distortions. Surprisingly, the hind hooves of horses, who were shod in front, demonstrated a lower width:length ratio in comparison with those horses who were barefoot all round.

Although heel contraction occurs more often in shod horses compared to barefoot horses, the difference between the two conditions was not statistically significant, when other factors were considered.

The most important factors that impacted contraction were individual horse features and breed. Because of significant difference in incidence of contraction between yards, researchers determined that further investigation of environmental factors causing hoof distortion need to be studied.

The sex, paddock time, the shoeing and its duration were found not to have statistical significance.

The study findings conclude that contraction of a horse's heels involves a number of factors related to the breed and other unknown features related to the individual horse. The results of the study counter the popular myth that metal shoes are the main cause of horse heel contraction, an important factor to be considered by all hoof-care providers. Further research needs to be conducted on larger groups of horses with similar genetic traits and environmental influences and horses from yards with low and high incidence of heel contraction to evaluate how they differ in the factors that influence the inter-workings (biomechanics) of the parts of the horse's hoof. 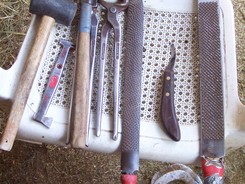 A Farrier's Tools of the Trade

My horse has a club foot. Can it be treated …