Hoof care STARTS on the inside

At some point during the ownership of our horse companions, we either have a problem or face an injury. At that time we start on the path of gaining knowledge, as most of us truly want our horses to have a healthy and happy life. I actually feel that I have been fortunate that I have only had to become an “expert” in a couple of areas, and with Nan the issue has been her feet.

The old saying “no hoof, no horse” has been around for many years and why it is truly applicable starts with understanding what a hoof is. So let's start with a little anatomy 101. Here is a diagram and an explanation to start the process: 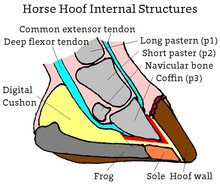 In the front feet, the wall is thickest at the toe; in the hind feet the hoof wall is of a more uniform thickness. The wall, bars, and frog are the weight-bearing structures of the foot. Normally, the sole does not contact the ground.

Inside the hoof, lateral cartilage extend back and up from the inner and outer sides of the third phalanx. These cartilages are flexible, but as the horse ages they are usually ossified and replaced by bone.

Between the second and third phalanges and above the deep flexor muscle tendon is a small bone called the navicular bone. The navicular bone and its associated bursa, a fluid-filled sac that reduces friction between the tendon and the bone, is where navicular disease occurs and this causes lameness.

The digital cushion is a mass of flexible material that contributes to the formation of the heels. This structure is one of the primary shock absorbers of the foot. As weight is placed on the hoof, pressure is transmitted through the phalanges to the wall and onto the digital cushion and frog.

The frog, a highly elastic wedge-shaped mass, normally makes contact with the ground first. The frog presses up on the digital cushion, which flattens and is forced outward against the lateral cartilages. The frog also is flattened and tends to push the bars of the wall apart. When the foot is lifted, the frog and other flexible structures of the foot return to their original position. 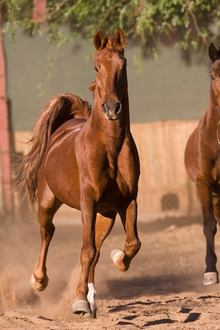 Keeping your horse's feet healthy is the most important factor in reducing the chances of lameness.

So ends the narrative of the anatomy of the hoof.

You may remember me mentioning that Nan had an injury about four years ago. She was in the round pen with me working her and her hoof glanced off of a wooden panel and a 6-inch splinter was forced into her hoof wall via the coronet band.

I was on the phone letting the vet know that I was flying in and they were ready for her. They stopped the flow of blood using a tourniquet.

They ended up having to section an enormous quarter off of her to flush the area of splinters in the hoof, and for months I had to clean and bandage the area.

Had I not done this, Nan would have been permanently lame and I probably would have had either chronic lameness issues or ended up having to make some other form of drastic decision (and yes, I have had that choice in other instances with Nan).

Since that time, I made the decision to go with barefoot trims for her. She is a horrid overreacher and routinely ripped shoes off of her front feet and NOTHING stopped it. I felt that we were just keeping her front hooves in a perpetual state of damage.

Then it became years of growing out the damage, and last year X-rays revealed that the injury had probably nicked her coffin bone as there was some remodeling that was showing up.

Despite the cracking in the quarter that she repeatedly has as scar tissue, I have kept her sound. Some of this is due to constant vigilance to the following things, and these are your summer hoof care tips:

In doing research I ran across a site for Keratex and read their article about hoof care and what they said makes a TON of sense.

Typically, we (horse owners) were under the impression that leaving mud slop around our tanks was the way to keep horses' hooves “wet” in summer and slopping on the oily nasty conditioners was the other way to go.

According to the makers of Keratex, both are BAD. Why?

Hooves are like fingernails - what happens when yours get wet? They get weak, and as for the oil substances, well, they mix with urine and turn into a water soluble liquid and wash right off into the dirt…. Again, this makes sense to me.

Another point they make is that modern bedding takes a wet hoof and super dries it, thus resulting in cracks. Their feeling is that straw is still the best bedding to use; other beddings stay wet and keep the hoof in a perpetual state of dampness, thus… weakening the hoof.

I am impressed enough with their logic and information that I am going to order a bottle of their gel and try it on Nan this year and see if it makes a difference. In the meantime, stay cool and Happy Trails to all. 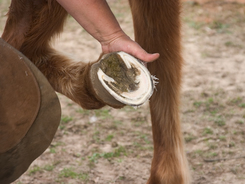 How do you shoe a horse with crooked legs …

What should a horse owner know and do to recognize and …

Hoof Care for a Horse with Laminitis and or Founder