Teff is a warm-season annual grass that is now being grown in many regions of North America for livestock and by commercial hay producers who want a fast-growing, high-yielding crop with good forage quality. This grass has a wide range of adaptation and is used as hay, silage or pasture for dairy, beef, sheep or horses.

The growing popularity of teff is due to its ability to produce high-quality hay in a relatively short growing season. Teff can be planted in late spring and cut multiple times during summer, with yields averaging 4 to 8 tons per acre, depending on the length of the growing season. It does not tolerate frost.

The high yield during a long growing season is an advantage over cool-season grasses such as timothy, which normally have poor production during hot weather following the spring harvest, which means the farmer generally only gets one cutting of hay.

Teff was originally grown in Ethiopia as an ancient grain—one of the earliest domesticated plants. According to *Dawn Sherwood, PhD Oregon State Extension Horse Specialist, the grain was originally used for human consumption—similar to the way we use wheat.

It continues to be used as a grain crop in Africa. The tiny seeds are probably the smallest “grain” in the world, and are traditionally ground into flour to make a sort of flat bread or sourdough-risen pancake called injera.

In recent years, teff hay has become popular among horse owners who are seeking to reduce the amount of sugar in their horses’ diets. “ Warm-season grasses generally have lower sugars (non-structural carbohydrates) and starches because of the way these grasses store sugars--which is different from grasses we are familiar with such as timothy, orchardgrass, brome, etc., which are cool-season grasses,” according to Dr. Sherwood.

Dr. Sherwood goes on to say, "Actual sugar levels depend on the growing conditions, soil fertility and other factors, however. If you are looking for low-sugar hay for a metabolic horse, it’s all about how the hay is grown and managed. Teff can be as low as 5% sugar and the only other hay that’s this low in sugar is bluegrass straw—which is also used a lot for metabolic horses."

"Since teff hay is that low in sugar it makes good hay for horses with Cushing’s or who are laminitic, or easy keepers, etc., but if it is not grown and managed for low sugar levels it can be as high as 22% sugar. You can’t just assume it is low in sugar,” says Sherwood.

It is important to have hay tested, especially if you are buying it for a horse that has a medical need for low sugar. A growing number of hay producers are getting their hay tested and you can ask them for the test results. If you are selecting hay for a horse that needs low sugar, always have it tested—whatever kind of hay it is.

Dr. Sherwood owned a metabolic mare that was insulin resistant and laminitic so she was looking into buying some teff hay.  “The teff hay that I looked at was actually higher in sugar than the orchardgrass I was finding.  Don’t assume that teff is low sugar, and also keep in mind the fact that some horses don’t like it.  Horses either love it or hate it. Some horses will go off feed if that’s all you give them,” she says.

“Teff can be an option for horses that need special low-sugar hay but you do need to have it tested. Here at the Oregon State University Horse Center we have school horses and also board horses for some of the OSU students. We’ve had all kinds of horses here—some that had PSSM, HYPP, metabolic problems, etc. I don’t even look at hay to purchase unless it is tested. Then I know what it is in terms of nutrient levels, and how we can adjust the diet for each horse’s needs.”

Research studies have compared teff consumption to timothy or alfalfa. Although teff hay is fine stemmed, leafy and 'soft,' when horses had timothy or alfalfa they usually didn’t touch the teff hay, if they had the choice.

“In those studies, the horses preferred the timothy or the alfalfa. If they were just offered teff and nothing else, a couple of research projects found the horses would eat it and were consuming about the same amount as they would if they were eating timothy,” according to Dr. Sherwood. Most horses will eat it if there is nothing else, but some horses refuse to eat it.  It may be partly due to the texture."

Another factor to consider is price. “It’s a niche market so producers charge more for it. And if it has to be transported very far, this will also add to the cost. I was pricing teff hay a few years ago and it was anywhere from $50 to $100 per ton higher than orchard grass hay. You can expect to pay more for teff hay just because this is a special market,” Sherwood says.

Dr. Sherwood also notes that "Standlee Hay Company markets many types of hay and pellets, including teff. “They make a teff pellet that a person might utilize to supplement a horse’s diet. These are the two options for feeding teff—long stem hay or pellets.”

Several varieties of teff grass hay are available, and they don’t all have the same characteristics. Since it is a shallow-rooted grass it is generally not utilized for horse pastures.

In summary - Three things to keep in mind about teff hay 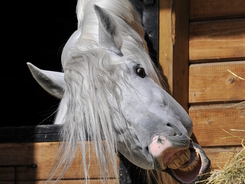 Oats and Oat Hay for Your Horse

An Illustrated Guide to Body Scoring Your Horse

Testing Your Horse Pasture for Peace of Mind

Buyer Beware! What's in Those Feed Products You Give Your …