Monty Roberts is the ultimate horse behaviorist. Whether the issue is how to encourage a horse to want to do something, or conversely how to overcome a remedial issue, Monty is called on by some of the greatest horse persons on earth to help. 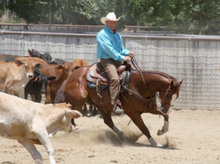 In the warm up, the horse and rider need to come together both physically and psychologically - Monty Roberts.
© 2020 by Cavallo New window.

In his latest series on his Online University Monty works with Missy who is looking for her forever home through adoption. In this online video series you'll learn about retraining Off The Track Thoroughbreds for new purposeful careers. See the promo video here.

"In the warm up, the horse and rider need to come together both physically and psychologically." - Monty Roberts

RETRAINING THE OFF THE TRACK THOROUGHBRED (OTTB)

Missy Part 2: From the Track to the Roundpen

Missy Part 5: Asking the Horse about Its Prior Experiences

Missy Part 6: From Racing to Riding

Launched in 2009, Monty Roberts and his team developed the first of its kind Equus Online University; an interactive online lesson site that is considered the most effective educational tool for horsemen on the web. It is established now that this learning system is the most comprehensive globally in horsemanship.

It was important to Roberts not only to quantify the language of the horses he calls Equus, but also to share its interpretation with lessons from world renowned horse persons such as Stefan Peters and Jan Ebeling from dressage, Will Simpson from Olympic jumping and Phillip Ralls and Richard Winters from Western Reining.

Since launching, Monty Roberts and many more legendary trainers have contributed their knowledge of horsemanship. "Considered a rosetta stone for horse communication, one of gestures like signing for the deaf, online lessons are available 24/7 have contributed greatly to the encouragement and study of non-violent training of horses.” said Roberts.

He wants the global impact to spread in his lifetime and encourages interested persons to log on at http://montyrobertsuniversity.com/library and have a free look around.

When Monty Roberts was invited by Queen Elizabeth II in 1989 to demonstrate his understanding of horsemanship, horse training’s 6000 year old tradition was forever changed. Roberts had cracked the code on the communication system horses used to survive for millions of years before humans had domesticated them. Roberts demonstrated concepts that drew a line at pain in training and his life’s goal is to leave the world a better place for horses and for people, too.

Debbie Roberts Loucks, Monty’s daughter, spearheaded the development, “We are first and foremost advocates for keeping horses in people’s lives. The more than 700 video lessons are in categories of Ground Work, from foundational to Advanced, and Ridden Work, from foundational to problem solving. And there is a terrific forum plus a searchable data base of over 600 Questions and Answers from Monty with a handy search bar.”

In 1948 while laying on his belly watching wild mustangs through binoculars in the Nevada desert, the 13-year-old Monty Roberts couldn’t imagine that what he was discovering about horses he would share nearly 70 years later online.

Queen Elizabeth clearly wanted the best for her horses. Whether they were Thoroughbred racehorses, military horses, carriage horses or simply horses she loved to ride, Her Majesty wanted them trained in the most respectful manner possible. The Queen endorsed Monty’s concepts of training horses without violence, causing them to rise to the highest degree of proficiency in their given discipline with the lowest possible stress.

Her Majesty observed five days of Roberts’ causing young horses to accept their first saddle and rider in about 30 minutes. It was then that the Queen requested a book about who Monty Roberts was and why he chose to reverse what had been the traditional ‘breaking’ procedures for 6,000 years. The publishers suggested the book would sell 3,000 to 5,000 copies, but, in fact, Her Majesty watched as Roberts’ first literary challenge reach six and a half million copies.

It has been with the Queen’s encouragement that Monty Roberts has now toured the world demonstrating his principles. In 41 countries Roberts has presented his audiences with over 11,000 horses. About 25 percent have been totally untrained, while 50 percent have been severely beset by behavioral problems. The remaining 25 percent simply refused to load in a trailer or truck used for transportation. All of these were successful in overcoming their given problem.

While tracking wild mustangs in Nevada as a boy, Roberts observed a nonverbal communication between the horses, a silent language he would later call ‘Equus’. Roberts incorporates Equus into his nonviolent training approach called Join-Up®. Roberts first developed Join-Up to help teach horsemen how to stop the cycle of violence typically accepted in traditional horse breaking. Roberts created a consistent set of principles using the horse’s inherent methods of communication and herd behavior.

The result is a willing partnership in which the horse’s performance can flourish to its full potential, rather than exist within the boundaries of obedience. These principles are valuable tools to understanding what motivates horse behavior and increasing effectiveness in any application. Join-Up training methods are most simply expressed in the process of starting raw horses. Without the use of pain or force, the trainer persuades a raw horse to accept a saddle and rider in less than 30 minutes.

Monty Roberts has discovered that these principles are effective as a tool for dealing with many stress-related issues of the human mind. Roberts believes that PTSD is not, in fact, a disorder, but an injury. He states that it should be PTSI. His belief is that injuries heal and most people believe that disorders are challenges that do not tend to heal. Disorders require other forms of dealing with disorders of the human.

With these beliefs in place Roberts has been working with military veterans and first responders in the United States, United Kingdom and Germany. More than 1,000 individuals have experienced the engagement of horses in the process of dealing with post-traumatic stress injury. The results of these clinics have been overwhelmingly successful and are gaining momentum throughout the areas where Roberts has conducted his clinics.

MONTY ROBERTS first gained widespread fame with the release of his New York Times Best Selling book, The Man Who Listens To Horses; a chronicle of his life and development of his non-violent horse training methods called Join-Up®. Monty grew up on a working horse farm as a firsthand witness to traditional, often violent methods of horse training and breaking the spirit with an abusive hand. Rejecting that, he went on to win nine world's championships in the show ring. Today, Monty's goal is to share his message that "Violence is never the answer." Roberts has been encouraged by Her Majesty Queen Elizabeth II with the award of the Membership in The Royal Victorian Order, as well as becoming Patron of Join-Up International. Other honors received were the ASPCA "Founders" award and the MSPCA George T. Angell Humanitarian Award and FEI’s Man of the Year. Monty was recently included as Horse and Hound Magazine’s Top 50 Horsemen of All Time. Monty is credited with launching the first of its kind Equus Online University; an interactive online lesson site that is the definitive learning tool for violence-free training.

Monty Roberts has created Join-Up International, a 501c3 non-profit foundation. With his learning center on his Flag Is Up Farms in Solvang, California, he has produced a growing list of certified instructors globally. These facts insure that Monty will meet his life’s goal which is to leave the world a better place than he found it for horses and for people, too.   www.MontyRoberts.com 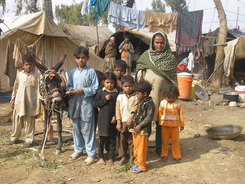