If you think the weather in North American places such as Montana and Michigan or in England and Europe gets cold for horses and caretakers, consider a recent scientific study about ancient horses in Siberia that adapted to extremely cold weather within a relatively short time.

Showing ability of horses to adapt to climate change

Yakutian horses developed their striking adaptations to the extreme cold climate present in the region in less than 800 years, making it one of the fastest examples of adaptation within mammals.

In a new scientific study, the comparison of the complete genomes of nine living and two ancient Yakutian horses from Far-East Siberia with a large genome panel of 27 domesticated horses reveals that the current population of Yakutian horses was founded following the migration of the Yakut people into the region in the 13-15th century AD.

Yakutian horses, thus, developed their striking adaptations to the extreme cold climate present in the region in less than 800 years. This is one of the fastest examples of adaptation within mammals. The findings are reported in the PNAS early edition from November 23rd by an international team of researchers led by Dr. Ludovic Orlando from the Centre for GeoGenetics at the Natural History Museum of Denmark, University of Copenhagen.

From an evolutionary perspective, it happened almost overnight. In less than 800 years Yakutian horses adapted to the extremely cold temperatures found in the environments of eastern Siberia. The adaptive process involved changes in the expression of a plethora of genes, including some also selected in human Siberian groups and the extinct woolly mammoth.

Horses have been essential to the survival and development of the Yakut people, who migrated into the Far-East Siberia in the 13-15th century AD, probably from Mongolia. There, Yakut people developed an economy almost entirely based on horses.

Horses were indeed key for communication and keeping population contact within a territory slightly larger than Argentina, and with 40 % of its surface area situated north of the Arctic Circle. Horse meat and hide have also revealed crucial for surviving extremely cold winters, with temperatures occasionally dropping below -70C.

Horses have been present in Yakutia for a long time as 30,000 year-old Late Pleistocene fossils from the region show. Yet, Dr. Ludovic Orlando and his team now reveal that ancient horses of this region were not the ancestors of the present-day Yakutian horses.

A divergence as deep as the origin of modern humans

The genome sequence obtained from the remains of a 5,200 year-old horse from Yakutia appears within the diversity of a now-extinct population of wild horses that the team discovered last year in Late Pleistocene fossils from the Taymir peninsula, Central Siberia.

This new finding extends by thousands of kilometers eastwards the geographical range of this divergent horse population, which became separated from the lineage leading to modern horses some 150,000 years ago. It also extends its temporal range up to 5,200 years ago, a time when woolly mammoths also became extinct. Dr. Ludovic Orlando says:

"This population did not appear on any radar until we sequenced the genomes of some of its members. With 150,000 years of divergence with the lineage leading to modern horses, this makes the roots of this population as deep as the origins of our human species."

Interestingly, the new genome analyses show that the horses that Yakut people now ride and probably rode all along their history (as shown by the genome of a ~200 year-old horse), are not related with this now-extinct horse lineage, but rather with the domesticated horses from Mongolia.

Dr. Ludovic Orlando says: "We know now that the extinct population of wild horses survived in Yakutia until 5,200 years ago. Thus it extended from the Taymir peninsula to Yakutia, and probably all across the entire Holarctic region. In Yakutia, it may have become extinct prior to the arrival of Yakut people and their horses. Judging from the genome data, modern Yakutian horses are no closer to the extinct population than is any other domesticated horse."

The new genome analyses show that the founders of the modern Yakutian horse population probably entered into the region with Yakut horse-riders in the 13-15th Century AD. Dr. Ludovic Orlando further adds: "This is truly amazing as it implies that all traits now seen in Yakutian horses are the product of very fast adaptive processes, taking place in about 800 years. This represents about a hundred generations for horses. That shows how fast evolution can go when selective pressures for survival are as strong as in the extreme environment of Yakutia."

The team leveraged on their large horse genome panel to identify the genes underlying such adaptations. Strikingly, they found that a large fraction of the selection signatures were not located within the coding region of genes, but within their upstream regulatory regions. It, thus, suggests that the adaptation of Yakutian horses to their environment took place through a massive reprograming of gene expression.

Dr. Pablo Librado comments: "The founder group of the current population was quite reduced in size. The genetic variation standing within gene bodies was, thus, probably limited in comparison to that present within regulatory regions. These regulatory variants probably offered as many possibilities to rapidly modify horse traits in a way that was compatible with their survival."

Focusing on the genes and their regulatory regions showing evidence of selection, the team identified key biological functions involved in the adaptive process. These concern morphological changes, hormonal responses involved in the regulation of thermogenic requirement and the production of anti-freezing compounds.

The list of selective signatures also include genes, such as TGM3, which is involved in hair development and might be responsible for the extremely hairy winter coat of Yakutian horses. Dr. Librado adds: "In addition to unveil their evolutionary origins, our approach helped narrow down the genetic basis of adaptations that are unique to Yakutian horses.

In one word, their genetic makeup. We also found genes that were reported to have undergone selection in other Arctic populations, such as indigenous Siberian humans, and even the woolly mammoth. It provides a compelling example of evolutionary convergence, where unrelated groups exposed to similar environments end up independently developing similar adaptations."

Dr. Clio Der Sarkissian concludes: "Our work shows the power of ancient DNA, as we would have never been able to discover the existence of the now extinct ancient population of horses by analyzing the genome of modern horses. With ancient genomes, we can now understand the dynamics of past populations at unprecedented levels and track, through space and time, how these became adapted to changing environments."

"Applied to pre-industrial museum specimens, our approach can therefore help following how extant populations have been affected by ongoing climate changes and recent human activities. This can help develop tailor-made conservation programs, which will be ultimately essential for preserving endangered populations."

The group has already implemented such approaches for preserving the Przewalski's horse, which represents the last truly wild horse living in the planet.

The above post is reprinted from materials provided by Faculty of Science - University of Copenhagen. 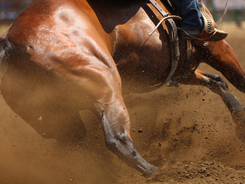 Training Young Horses: The Science behind the Benefits

Poor Horse Behavior? It Could Be Pain-related