47 million years ago the Earth was much warmer and the area of Geiseltal was a swampy subtropical forest whose inhabitants included ancestors of the horse, ancient tapirs, large terrestrial crocodiles, as well as giant tortoises, lizards and ground-dwelling birds.

The data indicate that the body size of the horses and tapirs developed differently not because of the climate, but because of different life cycles.
© 2013 by Daniela Hartmann

So rich are the Geiseltal finds that they give researchers an unprecedented high-resolution picture of evolutionary dynamics at the population level.

A team led by Dr Márton Rabi from the University of Tübingen and the Martin Luther University Halle-Wittenberg (MLU) has shown that the body size of two species of mammals developed in opposite directions.

The study, published in Scientific Reports, was carried out with Simon Ring and Professor Hervé Bocherens at the Senckenberg Centre for Human Evolution and Palaeoenvironment and the University of Tübingen in cooperation with Dr Oliver Wings from the MLU.

"We were initially interested in the evolution of the ancient horses, which were about the size of a Labrador dog. These animals are particularly abundant in the Geiseltal fossil record," Rabi says.

Researchers initially believed they had several species of early horse. "However, we found that here, there was only one species, whose body size shrank significantly with time," Rabi explains. The team wanted to test whether this body size shift was climate-induced, since past global warming caused body-size reduction in ancient mammals.

To further test the data, the team sought to discover whether the dwarfing process was unique to the horses. For comparison, they examined the evolution of the tapir ancestor called Lophiodon. "We had reason to question the Geiseltal's constant-climate data; so we expected that other mammals would show the same body-size trends as the horses," Simon Ring explains.

In a surprising result, the tapirs -- also a single species -- revealed the opposite trend. They grew larger instead of shrinking.

"All the data indicate that the body size of the horses and tapirs developed differently not because of the climate, but because of different life cycles," explains Bocherens. Small animals reproduce faster and die younger: Relative to their size, they don't have to eat as much to maintain their body mass and can devote more resources to having young.

Larger animals live longer and have lower reproduction rates. They have to eat more and therefore have fewer resources for reproduction -- but, being large, face fewer predators and can range further to get better food.

That extends their lives and gives them more time to breed. The Geiseltal tapirs and the horses therefore likely maximized the different advantages of their respective life cycle strategies, which caused divergent body size evolution. 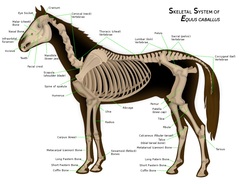 Winterize Your Horse - The Pros and Cons of Blanketing

Humane Society of the US Issues Statement Responding to the …