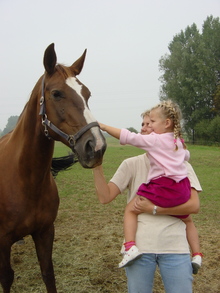 Since the advent of the ‘five freedoms of animal welfare’ and the evolution of ‘the five domains model’ increasing attention has been placed on equines not just surviving but thriving under human care.
© 2003 by Jolante van Hemert New window.

With around 50 recent horse behavior studies referenced in the 40 minute presentation (and apologies for the many not mentioned), there is an undeniable growing interest to understand our impact on physiological and behavioural states of our equine partners.

“The road to horse and human well-being” was the journey unfolding as Merkies expounded on the discoveries of her studies and those of fellow researchers.  Evidenced-based research stands to make great strides toward continually improving equine welfare.

What do we know about horses?

The talk began by introducing one of Merkies’ collaborative research studies on how humans perceive their bond with horses.  The survey indicated people would characterize their bond in several ways: the horse approaching them, vocally greeting them, trusting them in a frightening situation, taking care of them during hardships and physically touching them.

Another study showed humans can distinguish between positive and negative domestic horse vocalizations.

A study by Merkies PhD student, Cordelie DuBois, surveyed participants with surprising results.  When asked to rank welfare-compromising scenarios, most could easily pick out a physical threat to a horse but there was more variance in answers to questions where the effects of boredom or frustration were to be identified.

How do horses perceive us & what impact are we having on their welfare?

Since the advent of the ‘five freedoms of animal welfare’ and the evolution of ‘the five domains model’, increasing attention has been placed on animals not just surviving in our care but thriving and having their social/emotional needs met for a life worth living.  Scientific research continues to contribute to an ever increasing knowledge base.

Merkies’ latest collective paper on the Effect of Human Attachment Style on Horse Behaviour and Physiology during Equine-Assisted Activities was published earlier this year.  The pilot study aimed to determine the effect of the attachment style of at-risk adolescents on the physiology and behavior of therapy horses during a 10-week Equine Facilitated Learning program.

The therapy horses used during this study indicated a low stress response toward participants in the program.  In particular, a human insecure attachment style produced more predictable behavioural responses in the horses.

In another study, Merkies and her team discovered that, depending on the kind of stress, horses might blink significantly less when they’re experiencing acute stress.

Horses may understand us better than we understand them.  One study has shown that horses are adept at distinguishing human facial expressions.  Another study by Merkies’ graduate student, Abby Hodder, further supported this research and explored how this ability could influence the affective state of a horse.

Can we say we are as good at reading a horses’ expression?  Have a look at the research on facial grimace recognition in horses to see if you can distinguish between relaxed and pained expressions.

Merkies has also joined researchers in the quest to find out how horses listen to us and if the human voice could have a calming effect on horses.  She relays, horses in a round pen moved more quickly when a stern voice was introduced than when a pleasant one was used.

The horses were also more likely to turn their body toward a pleasant voice.  Merkies has also seen for herself in various studies that horses do not like being alone, instantly becoming calmer when a human enters a round pen scenario. Another study reveals horses are more likely to approach an attentive person over an inattentive one.

Studies on horses’ emotional intelligence have come out with conflicting results with some pointing out a confident handler could more easily lead a horse through an obstacle course, while other studies suggest horses are not stressed by a nervous handler.

Some studies have suggested horses can recognize different emotions but empathy or experience of those emotions are unknown.

The hot topics of positive and negative reinforcement in the training of horses had been a recurring theme throughout the ISES conference and was not to be left out of Merkies’ presentation.

Incorrect use of negative reinforcement (such as incorrect timing removing the pressure of an aid) has been linked to increased stress in horses.

Positive reinforcement has been shown to lead to anticipatory behaviour and a greater attentiveness to the trainer.  Other studies have also revealed horses kept on pasture desensitize to novel stimuli quicker.

The talk finished up on more recurrent themes of ‘social license to operate’ and charging the human handlers with practicing ‘agency’ for the horse.  Tuning in to the horses needs and allowing them to express themselves.

Not dismissing if they turn away when the bridle is presented, and similar cues delivered with body language.  Education is the key to recognizing positive indicators of welfare and picking up on warning signs.  Equitation science will continue to play an important role championing for equine welfare.

Press release by The Horse Portal - University of Guelph 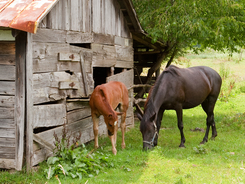 Comparing Horse and Donkey Skulls for Insight into …