Recent research shows that the effects of vibrations produced by horses during horse-riding lead to the activation of the sympathetic nervous system, which improves learning in children.

Research shows the effects of vibrations produced by horses during riding lead to activation of the sympathetic nervous system, improving learning in children.
© 2016 by Shutterstock

Mitsuaki Ohta, professor of Tokyo University of Agriculture and his research team examined the effects of horseback riding on the performance of children by having them complete simple tests directly before and after horse-riding, while measuring the children's heart rate in response to movements created by the horses.

The behavioral reactions of the children were tested using a 'Go/No-go' test, which assesses cognitive response using fast computerized questions. The test determined the children's ability to appropriately respond in a situation, by either performing an action or demonstrating self-control. The children were also asked to complete simple arithmetic problems to test their mental performance.

The results showed that riding on some horses greatly improved the ability of the children to perform the behavioral tasks, but less of an effect was seen on the children's results when solving arithmetic problems.

Ohta believes this difference in results may be due to the simplicity of the mathematical test, as increases in heart rate were only associated with the behavioral test.

These results mean that the act of horse-riding could improve cognitive abilities in children. These are brain-based skills of which an improvement can lead to enhanced learning, memory and problem-solving. 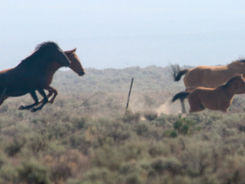