A horse that doesn't bolt at the sight of a rustling plastic bag, or shy at a bicyclist going by certainly offers safer and more enjoyable rides.

Theories abound on how best to help a horse overcome its natural instinct to fear unusual things. Research is now demonstrating which training methods produce the best results.

Scientists at the Danish Institute of Agricultural Sciences evaluated the effectiveness of three different approaches to conditioning horses in calmly accepting scary objects. They discovered that one training technique stood out as superior to the rest.

A second group of horses were gradually introduced to the bag, under a training method termed desensitization. Only once the horses became comfortable with each step were they then shown the moving bag.

The third group of stallions were given a positive reward in each session, so they would associate the reward with the frightening bag. This group was trained using the counter-conditioning technique.

The horses trained by desensitization most quickly learned to remain calm when the bag was around. These horses had fewer flight responses to the bag and needed fewer training sessions before they became comfortable with the bag.

As well, all horses that were introduced gradually to the bag eventually became accustomed to it. Meanwhile some horses trained with the other methods never completely overcame their fear of moving white bags. 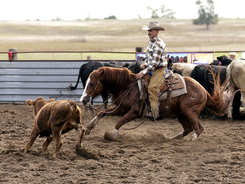 The Run For A Million Welcomes Cow Horses to 2021 Event with $150,000 Fence Work Challenge

Is it Time to Change Bits? What Your Horse May Be Trying to …