When Animal Wellness Action opened shop we committed to making federal legislation that would end doping in American horse racing one of our top priorities. For me, it was the top priority, and it has been ever since. 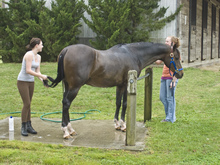 Two women getting a Thoroughbred horse ready for competition

Chris McCarron, a Hall of Fame jockey who has won the Kentucky Derby, The Preakness, and The Belmont, twice each, understands and agrees that the welfare of the horse must come first, and he's not afraid to say it.
© 2008 by Michael Tefft New window.

At the time the Horseracing Integrity and Safety Act was first introduced, we felt it stood the best chance to pass of any equine protection legislation. We’d been beating our heads against the wall over the PAST Act that would end the soring of Tennessee Walking Horses and the SAFE Act to end horse slaughter, which has been kicked around for more than a decade. And we were right, as HISA was enacted in December 2020 and takes effect this July.

Working with industry partners like The Jockey Club, the New York Racing Association, and Water, Hay, Oats Alliance, we forged a team that was very successful in lobbying during nearly 1,000 meetings on Capitol Hill in the Coalition for Horse Racing Integrity.

One of the very first coalition backers I met was a man named Chris McCarron, a Hall of Fame jockey who has won the Kentucky Derby, The Preakness, and The Belmont, twice each. He’s one of the winningest Thoroughbred jockeys of all time, seventh in career wins and eighth in purses won, and the man has guts. He understands and agrees that the welfare of the horse must come first, and he’s not afraid to say it.

Long retired, but considered a pioneer in my book, we joined in countless discussions about ending abuse in American horse racing, and McCarron is one of the few jockeys who has been willing to stand up publicly and speak out on these issues. He brings tremendous credibility to the cause, and he’s in it for the right reasons.

As the call to post came at the running of the 148th Kentucky Derby on Saturday, we must remember that the welfare and safety of the equine athletes in this field must come first, and Chris McCarron has joined host Joseph Grove, a native and lifelong resident of Louisville, and me to discuss the importance of that sentiment.

To listen to the Animal Wellness Podcast with Chris McCarron, click here.

Marty Irby is the executive director at Animal Wellness Action in Washington, D.C., and a former 8-time world champion equestrian who was honored by Her Majesty Queen Elizabeth, II for his work to protect horses. Follow him on Facebook and Instagram @MartyIrby.

Animal Wellness Action (Action) is a Washington, D.C.-based 501(c)(4) organization with a mission of helping animals by promoting legal standards forbidding cruelty. We champion causes that alleviate the suffering of companion animals, farm animals, and wildlife. We advocate for policies to stop dogfighting and cockfighting and other forms of malicious cruelty and to confront factory farming and other systemic forms of animal exploitation. To prevent cruelty, we promote enacting good public policies, and we work to enforce those policies. To enact good laws, we must elect good lawmakers, and that’s why we remind voters which candidates care about our issues and which ones don’t. We believe helping animals helps us all. 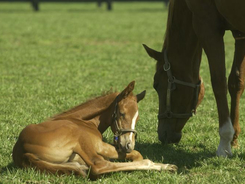 Foundation for the Horse Offers New Innovation and Discovery …

The Cost of Re-sedation (“Topping Up”) in Equine Power …