The study, 'Evaluation of hoof pressure, contact area, and force using Fujifilm in booted and shod horses' was prepared for the International Canine and Equine Locomotion Conference in Switzerland in September, 2020.
© 2020 by Cavallo

Jennifer Gill, Ph.D., and assistant professor of equine science at Western Kentucky University discussed the study first conducted by Gabriella Lynn. The study, “Evaluation of hoof pressure, contact area, and force using Fujifilm® in booted and shod horses” was prepared for the International Canine and Equine Locomotion Conference to be held in Switzerland in September, 2020.

Gill recapped the study results and shared that “the Cavallo Trek Hoof Boot was better at distributing and absorbing pressure on hard terrains than when the horse was barefoot.” Watch the full webinar here: https://www.youtube.com/watch?v=wY7DYZTNSPs

The study focused on horse’s hooves while traveling on asphalt—looking at the surface area and force as well as pressure. “The Cavallo Hoof Boots protected the entire hoof itself, which we thought was very beneficial especially over some other types of hoof protection such as horseshoes,” Gill said.

How does the Cavallo Trek hoof boot compare to a steep horseshoe with Equi-Pak pour-in pad and a steel horseshoe without a pad? Looking at five mature geldings and mares, the study used imaging to find out how much pressure was felt in the horse’s hooves.

They used FujiFilm with a detection range of 350-1400 PSI. The film allowed a pseudocolor analysis read out and allowed the scientists to see dynamic pressure with color mapping.

Gill described how each hoof image was taken.

“What we would do to collect our hoofprints was to place the film down, pick up the horse’s foot, place it onto the film, pick up the opposite front foot, then the horse would shift its weight onto that foot that was in contact with the film.

Then we’d place the opposite foot back down and pick up the hoof that was on the film. We found that this was a very good method for getting a hoofprint that was very representative of the horse’s weight on the film.”

“We found that the Cavallo Trek Hoof Boots was significantly lower in pressure than the other two treatments,” Gill said. “And this is what we expected from our data. We would have expected that the Cavallo Trek Hoof Boots would have been lower than our steel horseshoe and our steel horseshoe with Equi-Pak—especially with a hard terrain.

“The contacting surface area with the Cavallo Trek Hoof Boots was significantly higher than the other two treatments,” Gill continued. “This is what we were hoping for and what we expected to see. There was more tread that was in contact with the ground than would be with the steel horseshoe and the steel horseshoe with Equi-Pak.

We think that the steel horseshoe with Equi-Pak, we didn’t see much of an increase in surface area with that because of the fact it was a hard terrain and I don’t think that the Equi-Pak was in contact the surface. Maybe on a softer terrain you would have more contact with the Equi-Pak pour in pad and the surface that the horse was walking on.

“Based on this result, we would say that horses would have better traction in the Cavallo Trek Hoof Boots and be better able to dissipate those forces and pressure because of the increases in surface area,” Gill said.

Gill says the research is clear that horses are helped when wearing Cavallo Hoof Boots. “In conclusion, horses ridden on hard surfaces may benefit from a Cavallo Trek Hoof Boots to mitigate damage to the foot,” Gill said. “We’ve found this to be very positive and confirm our other results with barefoot horses but now we’re also looking at other forms of protection. The Cavallo Trek Hoof Boots is looking to be the more positive outcome and more positive choice.”

Has Gill seen these results validated outside the university study? “We have used Cavallo Hoof Boots successfully with our horses at Western Kentucky University—especially when they lose a horseshoe or are barefoot during turnout and have sensitive feet,” Gill said. “We only do arena riding with our horses so they mostly encounter soft terrains while being ridden. Since we don’t trail ride them or ride them on rugged terrains, we don’t have to worry a lot about hoof damage. And so we don’t have as much of a need of using the Cavallo Trek Hoof Boots while the horses are being ridden. However, we do recommend them for people riding on the trails or riding on the road.”

Have similar studies been done? “ We feel that the research we are doing is very novel because we’re able to really look at where the forces are happening on the foot and then we’re looking at hoof boots as an alternative method of dissipating those forces that are coming in contact with the foot,” Gill said. “Fujifilm has been used in accessing saddle fit in horses by manufacturers. We do know that this film has been used in horses looking at saddle fit at least, so far.”

Will research continue? “We will continue to study the effects of hoof health perhaps in a study looking at the more long-term use of the hoof boot in horses,” Gill said. “We’re going to try to evaluate our prediction of better soundness in horses. Maybe we’ll use the hoof boots and some client owned horses and see if we can get similar results in the public.”

Gill finishes, “we believe that hoof health is very important to the athletic horse’s career and taking the best care of a horse’s feet is of primary importance. We really do stress that. It’s so important to take very good care of your horse’s feet to live happy, sound lives. Hoof boots may play a vital role in achieving soundness in the athletic, barefoot horse. It’s an option that is available to horse owners out there and can be very good for horses that are ridden on harder terrains.”

Cavallo President Carole Herder is the author of the #1 International Bestseller, There Are No Horseshoes in Heaven, and the newly released Hoofprints on The Journey. She has been involved in horse health since 1993. Her company, Cavallo Horse & Rider Inc., develops, manufactures and distributes horse products in 26 countries. Herder designed and developed Cavallo Hoof Boots and Total Comfort System Saddle Pads. She presents trainings around the world to teach the benefits of keeping horses in a natural state. Herder is an honored recipient of the Royal Bank of Canada Woman Entrepreneur of the Year Award. She is a member of the Women’s Presidents Organization, supporting female entrepreneurs in every industry. 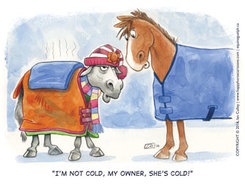 To Blanket or Not to Blanket - Consider Your Horse

Monty Roberts' New Series on Building a Mannequin Rider for …