Renal function is an important component of overall health in any species. The kidneys perform several important functions, including waste removal, electrolyte balance, blood pressure maintenance, a calcium source for bone health and production of factors for red blood cell stimula-tion, to name a few.

In addition, the kidneys receive substantial blood flow— approximately 25% of the cardiac output. Therefore, changes in blood flow, either increased or decreased, can have a significant impact on renal health.

Equine necropsy cases submitted to the University of Kentucky Veterinary Diagnostic Laboratory (UKVDL) over an eight-year period (2010-2018) were queried for diagnoses related to renal pathology. Equine fetuses, foals, and adults of a variety of breeds were included.

Within the infectious/inflammatory group, the most common cause was a bacterial pathogen resulting in nephritis. The largest proportion of cases was due to Leptospira interrogans infections in fetuses. Leptospirosis is a cause of abortion that often localizes to the kidney.

Actinobacillus equuliwas another common bacterial isolate, most often seen in neonatal foals and occasionally adults. In foals, infection with A. equuli is colloquially termed “sleepy foal disease.” Routes of infection for A. equuli include a contaminated umbilicus, inhalation or ingestion.

Several cases of bacterial pyelonephritis were identified. Pyelonephritis is inflammation of the renal pelvis that most often results from an infection that extends up to the kidneys from the lower urinary tract (i.e. urinary bladder). The most common bacterial isolates identified from cases at the UKVDL included Streptococcus zooepidemicus, Escherichia coli, and Enterococcus sp.

Lesions that comprised the congenital category included renal dysplasia, renal agenesis, congenital renal cysts or congenital hydronephrosis/hydro-ureter. While there have been proposed associations of hereditary or nutritional components for developmental renal abnormalities in some species (i.e. dogs and pigs), in horses the pathogenesis of these congenital lesions remains to be elucidated.

Significant nephroliths (kidney stones) were identified in 10 horses. The stones were composed of calcium carbonate or a mixture of calcium car-bonate with other minerals. Typically, horses with nephroliths remain asymptomatic until the stone results in obstruction. Development of nephroliths has been associated with any nidus of renal disease including cysts, papillary necrosis, pyelonephritis or neoplasia.

Papillary (medullary crest) necrosis due to suspected long-term use of non-steroidal anti-inflammatory drugs (NSAIDs) was identified in three of the four cases in the toxic category. NSAIDs (i.e. phenylbutazone/bute and flunixin meglumine/Banamine) are routinely used in horses for pain management.

NSAIDs work by inhibiting a specific group of enzymes, cyclooxygenase (COX), which subsequently reduces inflammation. Unfortunately, other downstream effects of this pathway include decreased production of prostaglandins. Specific cells located in the renal medulla produce prosta-glandins that are mediators of blood flow to the tissue.

Therefore, decreased prostaglandin production results in impaired blood flow to the medulla and subsequent necrosis. Other compounding factors include dehydration and use of multiple NSAIDs. Luckily, renal complications due to NSAIDs are well described with the result that there is judicious use of these medications in practice.

The equine kidney has a vital role in overall health. A variety of disease processes can impair renal function. Awareness of these diseases is important for equine health. 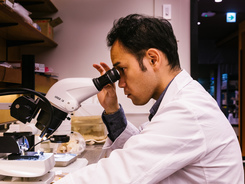