At least three other mares have given birth to tiny foals inside the crowded pens at the holding facility in the first week since the massive capture operation in northeastern Nevada concluded on February 25, 2011. The total number of spontaneous abortions, births and deaths is yet unknown as the Antelope horses were shipped to at least four different BLM holding facilities.

A video shows a newborn foal whose mother was captured recently in the Antelope roundup, meaning that she was stampeded for miles by helicopter while she was heavily pregnant. Many other Antelope mares have aborted their late term foals.

AWHPC is predicting that dozens more mares will spontaneously abort their foals over the coming weeks, and many newborn foals will not survive.

News about the continued suffering of wild horses captured in BLM roundups comes as Interior Secretary Ken Salazar and BLM Director Bob Abbey testify before Congress this week to justify a requested $12 million budget increase for the wild horse program.

Last week, the BLM announced that it intends to remove an additional 15,000 mustangs from public lands over the next two years, boosting the captive holding numbers to well over 50,000 – a number that far exceeds the population of approximately 32,000 mustangs that remains in the wild.

“The BLM knows that winter is the time of year when mustang mares are in their final months of pregnancy and are particularly vulnerable to the stress and trauma of a miles-long helicopter stampede,” said AWHPC’s Deniz Bolbol. “Yet the agency continues to conduct roundups at dangerous times of the year.”

Bolbol added that it is against standard veterinary practice to transport pregnant mares near foaling time except to receive veterinary care. Her video of an exhausted Antelope mare who collapsed during a helicopter chase prompted a local law enforcement investigation and an admission by the BLM that agency procedures for ensuring humane treatment of mustangs need to be improved.

“It is disheartening that while the BLM is talking about reform, inhumane wild horse management decisions continue to cause extreme and unnecessary suffering,” said Neda DeMayo, CEO of Return to Freedom American Wild Horse Sanctuary and AWHPC coalition member. “No professional ranch manager would treat their horses this way. It should be an embarrassment to the BLM and the wranglers who accept these contracts. The American people expect more from the agency charged with protecting and preserving the nation’s treasured wild horse herds.”

Dr. Bruce Nock, a tenured faculty member at Washington University Medical School and an expert in the physiological effects of stress, has stated that such miscarriages are a direct result of the trauma of the roundup. “Expending resources to sustain and maintain a fetus. . . just isn’t physio–logical if it seems like you are about to die,” he wrote last year in a report for AWHPC.

The BLM captured 1,368 mustangs in the Antelope roundup, just over 800 of which – mostly mares and foals – were shipped to the BLM’s Palomino Valley Center. BLM ended the roundup 500-900 horses short of its goal of removing 1,867-2,228 mustangs from this 1.3 million-acre public lands area.

The agency then proceeded to ship Antelope mustangs to distant holding facilities despite philanthropist Madeleine Pickens’ offer to house captured horses on private lands adjacent to their home range, where they could become part of the Mustang Monument Eco-Sanctuary that her Saving America’s Mustangs Foundation is developing in the area. 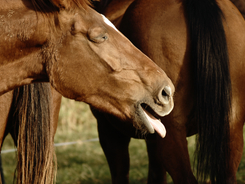 Equine Pleuropneumonia - Considered the Most Severe Form of Pneumonia

Probiotics in Horses: Potential Benefits and How to Choose …

NSC and ACTH - Double Trouble in the Fall