For owners and veterinarians, it is extremely frustrating when a horse dies suddenly and no explanation can be found. While intoxications as a cause of unexpected death are relatively uncommon, it is important to be aware of them, as they are potentially preventable. 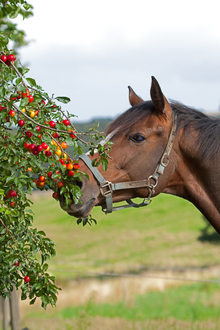 Eliminating toxins from horse farms can prevent some sad and avoidable deaths of horses.
© 2012 by MichaelHansen

Horse owners and veterinarians should be aware of the common toxins that can affect horses. Toxic plants, poorly processed haylage, hay containing blister beetles, and clippings from toxic plants can be tempting to horses when they are hungry. Eliminating these toxins from horse farms can prevent some sad and avoidable deaths.

The seven most common acute toxins that kill horses in a few to 36 hours include:

Botulism is caused by the bacteria, Clostridium botulinum. and is most commonly associated with the feeding of haylage containing the preformed toxin. Botulism has also been associated with the ingestion of lawn clippings and, occasionally, other forms of forage, including: acid treated hay, dry hay and corn silage.

If you are feeding your horses haylage/silage, they should be vaccinated for botulism. The vaccine only protects against Type B but, when a problem occurs, Type B is the most common type.

Typical clinical signs of botulism include: muscle weakness, tremors, difficulty swallowing, drooping eyelids and mydriasis (dilation of the pupils), occasionally leading to recumbency and death due to cardiac and respiratory failure.

The ionophores are coccidiostats used in the poultry industry but may be included in some cattle feed and mineral as growth promotants. The ionophores include monensin (Rumensin) and lasalocid (Bovatec). The most common clinical signs of toxicosis include: lethargy, cyanosis, depression, pulmonary edema, myocardial degeneration and death.

Feed only mineral and commercial rations intended for horses. They are manufactured to prevent accidental contamination with ionophores.

The needles and seeds of all yews are highly poisonous to horses and cattle, both in the fresh and dry form. However, the red fleshy seed covering is not poisonous. The toxic principle is taxine.

As little as 0.1% of a horse's body weight or one pound of English yew is toxic to a horse. Horses eating yew will die within 1 - 3 hours. Death is usually attributed to cardiac arrest and asphyxia.

Poison hemlock is a naturalized herb with an umbrella-form shape similar to wild carrot (Queen Anne's Lace). The plant grows in swampy areas, in wet meadows, and along the edges of streams and drainage ditches.

Cattle, goats, horses, swine, and sheep, as well as rabbits, poultry, deer, and humans have been poisoned after ingesting poison hemlock. Animal species vary in their susceptibility to acute toxicity.

Red maple leaf poisoning is associated with horses eating wilted red-maple leaves from broken branches or when horses reach over fences, consuming leaves that were disposed of into the manure pile. The amount of toxin increases in leaves during the summer. Fallen leaves remain toxic for a few weeks or more. Ingestion of fresh leaves does not appear to cause disease.

The ingestion of 1.5 - 3 grams of wilted leaves per kilogram of body weight will cause haemolytic disease characterized by severe depression, anemia and hemoglobinuria (presence of free hemoglobin in the urine). The toxic principle is thought to be gallic acid. Gallic acid has also been found in silver maple and sugar maple. Both of these tree species are capable of hybridizing with red maple.

Not all trees with red leaves are red maple. Red maples should not be grown in or adjacent to horse pastures, and fallen red-maple leaves should not be placed in locations where horses can ingest them.

Oleander poisoning in livestock has been associated with plant clippings in those areas where oleander is common. Sudden death was the most common presenting complaint. Other signs reported included: diarrhea, pulmonary edema, tachycardia, cardiac arrhythmias, colic and lethargy.

Presumptive diagnosis of oleander poisoning is based on matching clinical signs with evidence of consumption of oleander. A new two-dimensional, thin-layer chromatography analysis of ingesta for oleandrin and an awareness of lesions in heart muscle have greatly improved the ability to diagnose oleander toxicosis.

Blister beetle poisoning is associated with insect contamination of forage, usually diets containing alfalfa hay. The onset of signs of disease is rapid with signs of gastrointestinal tract distress, non-specific neurologic signs and dying in shock terminally, with duration of clinical signs ranging from 3 to 18 hours.

In fatal poisonings, gross lesions may be minimal or unapparent, and diagnosis must be confirmed by chemical detection of cantharidin in urine, blood, or stomach or cecal contents. Blister beetle poisoning is seen in the midwestern United States where blister beetles are abundant. 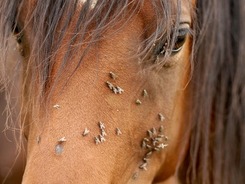 Protect Your Horse from Summer Sores and Fly Discomforts

Topline Loss - How Nutrition Can Help Your Horse

What Vaccines Does Your Horse Need …

Selenium, an Essential Mineral - What Horse Owners Need to …