Three horses have been confirmed positive for infectious anemia (EIA), the first such infection in a South Carolina animal since a donkey in Aiken County acquired the disease in 2014, State Veterinarian Michael Neault said. The first case was in a quarter horse in Berkeley County and the two contact quarter horse cases were in Barnwell County.

Map of fly season zones in the United States

There is no treatment for equine Infectious anemia, so if an infected animal does not die from the disease it will become a lifelong carrier serving as a reservoir for the disease, putting other equines at risk.
© 2019 by SmartPak New window.

The blood-borne illness does not infect humans but is potentially fatal to horses and other equine species. The virus that causes EIA is often transmitted by bloodsucking insects like biting flies but also can be introduced by infected needles or other medical, dental or tattoo equipment.

“This is a very serious disease,” Neault said. “There is no treatment for EIA, so if an infected animal does not die from the disease it will become a lifelong EIA carrier and serve as a reservoir for the disease, putting other equines at risk. For this reason, they must be permanently isolated and quarantined or euthanized.”

LPH encourages equine owners to have an annual Coggins test — a blood test that screens for EIA antibodies — performed on their horses even if the animals don’t leave the farm. That is especially important if they are housed at a boarding facility, said Sean Eastman, LPH Field Services director.

State law requires a negative Coggins test any time horses cross state lines and when owners take their horses to in-state gatherings of animals belonging to more than two horse owners — such as trail rides, horse shows or competitions. Owners should bring Coggins test documents with them when traveling with horses.

EIA is a reportable animal disease in all 50 states, meaning that positive cases must be reported by the testing laboratory to local state or federal animal health officials within two days of discovery. LPH maintains an animal reportable diseases list online at: www.clemson.edu/public/lph/ahp/reportable-diseases/. 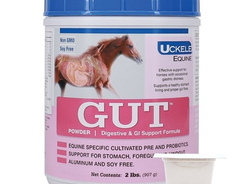 Probiotics in Horses: Potential Benefits and How to Choose the Right Product

NSC and ACTH - Double Trouble in the Fall