An adult male saddle-horse was submitted for emergency autopsy due to sudden collapse and death in its stall while being groomed. At autopsy, blood was present in the nares. There was marked pulmonary congestion and scattered foci of hemorrhage in lung.

Horseback riders enjoying a ride in the country

According to Animal Health Laboratory, University of Guelph, Yew toxicosis is the most commonly-diagnosed plant toxicosis at the AHL.
© 2009 by A4PGA New window.

The stomach was filled with fine fibrous ingesta in which were found three short 6-7 mm lancet-shaped fragments of evergreen leaves, suspicious for yew (Taxus spp.) among gastric content. Further investigation revealed that while being ridden that day, the horse had stopped and nibbled on a yew bush.

Figure 1. Taxus spp. (yew) showing typical evergreen leaves and red fleshy fruit (A).  Note the fine point at the tip of the needle-like leaves (B).

Diagnosis is usually made by a history of unexpected death and finding the typical leaves in stomach or mouth. Stomach content can also be tested at an external laboratory for taxine, the toxin which is a cardiotoxic alkaloid that interferes with cardiac conduction. Death is rapid, often within 1-3 hours of ingestion, although this is dose-dependent. There is no treatment for the acute syndrome. Any prunings or plant material should be immediately removed from access by the herd. Horses are more sensitive to the toxin than ruminants, pigs or dogs.1 Depending on how long the animal lives, there may not be histologic lesions visible in the heart. AHL 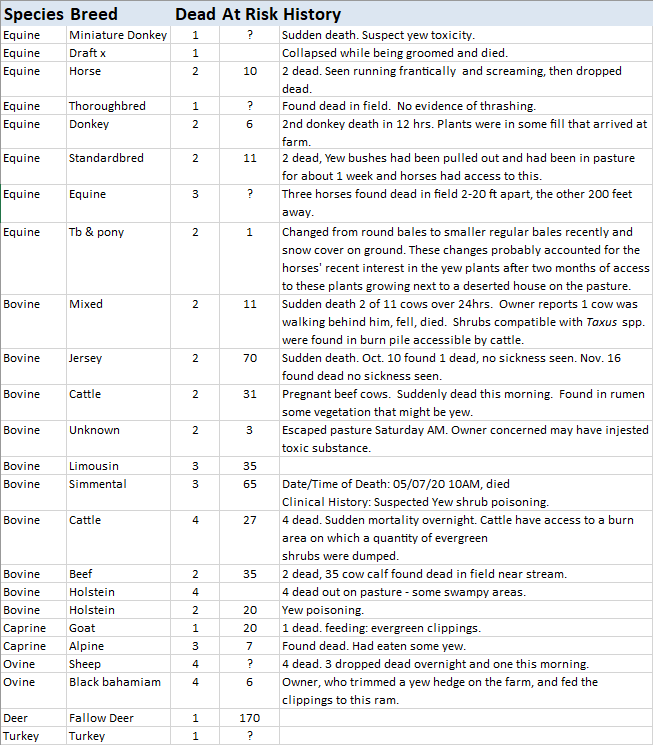 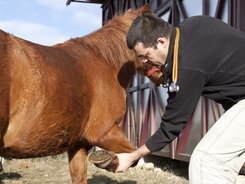