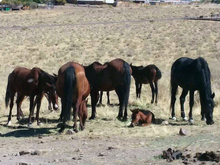 Small herd of wild horses including a foal

The protections sought by Congressman Grijalva and the 11 bipartisan members of the House of Representatives raised concerns about proposed Bureau of Land Management (BLM) funding for a mass wild horse roundup and removal plan being pushed by the National Cattlemen’s Beef Association, and shockingly, the Humane Society of the United States (HSUS), the ASPCA, and Return to Freedom, among others.

"We commend Chairman Raul Grijalva and his colleagues for seeking restrictions on a plan that, if implemented as described, would decimate America’s federally-protected wild horse and burro populations over the next decade,” said Suzanne Roy, Executive Director of the American Wild Horse Campaign.

“We are deeply grateful to the Congressman for continuing his long-standing work as a great champion for wild horses, and to the other members  and the vast majority of Americans who oppose mass helicopter roundups and removals, barbaric surgical sterilization, and inhumane treatment inflicted on wild horses and burros by the federal government.”

The letter is directed at House Appropriations Committee leadership, which is currently negotiating with the Senate to finalize the Fiscal Year 2020 spending legislation. The House version of the Interior appropriations bill (which funds the BLM) includes $6 million to begin implementation of the Cattlemen’s/HSUS plan, while the Senate version includes $35 million -- a near doubling of the BLM’s current $80-million-a-year Wild Horse and Burro Program budget.

The plan misleadingly dubbed a “Path Forward for Wild Horse and Burro Management,” calls for the removal of 130,000 wild horses and burros from public lands over the next ten years.

Although billed as a “non-lethal plan,” would triple the number of wild horses and burros in taxpayer-funded holding with no guarantee of funding for their long term care.

In addition to mass removals via helicopter roundup, the funding would allow the BLM to conduct cruel sterilization surgeries to remove the ovaries of wild mares through a procedure that the National Academy of Sciences deemed “inappropriate for field application” due to risk of bleeding and infection.

The sign on letter notes that the spending bill attempts to make fundamental changes to the Wild Horse and Burro Program without hearings, testimony, evidence and consideration by the House Natural Resource Committee, the authorizing committee tasked with these responsibilities.

The letter was signed by 5 members of the Natural Resources Committee, including Chairman Grijalva, and Rep. Deb Halaand (D-NM), chair of the Subcommittee on National Parks, Forests and Public Lands.

The letter seeks “[t]o ensure that no irreparable harm comes to wild horses and that Congress has time to conduct an inquiry into the consequences of the plan before funding it.”

“If the plan is approved, it could result in the most sweeping changes to the wild horse and burro program since its inception nearly 50 years ago,” the letter states. 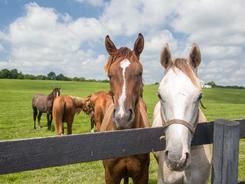