On November 14th, the House of Representatives approved the Prevent All Soring Tactics (PAST) Act, H.R. 5441, by an overwhelming 304 to 111 bipartisan vote. The Humane Society of the United States and Humane Society Legislative Fund applaud this crucial vote to protect Tennessee walking horses and related breeds from the cruel practice of “soring,” which is the intentional infliction of pain on the animals’ legs or hooves, to force them to perform an artificial, exaggerated gait known as the “Big Lick” that is prized in some show rings.

Horse ‘soring’ is one of the worst cruelties imaginable—where scofflaw trainers deliberately torment Tennessee walking horses to get them to fling their front legs high, just to win a blue ribbon in a show ring
© 2017 by Randall Saxton New window.

This legislation will amend the 1970 Horse Protection Act, closing loopholes that have allowed violators to continue their abusive practices. It will end the system of industry self-policing that the United States Department of Agriculture Inspector General called a failure and said should be abolished.

In its place, the bill would establish a program of third party, independent inspectors trained, licensed and assigned by the USDA. It would also ban devices integral to soring and strengthen penalties.

The HSUS has documented the abuse of soring in undercover investigations of the Big Lick segment of the industry in 2012 and 2015.

“For decades, we’ve pressed to end soring by conducting undercover investigations, raising public awareness, lobbying to secure greater funding for enhanced enforcement by the USDA and working with champions in Congress and coalition partners to enact this legislation,” said Kitty Block, president and CEO of the Humane Society of the United States and CEO of Humane Society Legislative Fund.

“Now, we’re calling on the Senate to pass the PAST Act and send it to President Biden’s desk. There’s no excuse for further delays or obstruction; these animals have suffered for far too long.”

“Horse ‘soring’ is one of the worst cruelties imaginable—where scofflaw trainers deliberately torment Tennessee walking horses to get them to fling their front legs high, just to win a blue ribbon in a show ring. It’d be like forcing an Olympian to wear broken glass in her shoes so the pain will make her leap higher over the hurdles,” said Sara Amundson, president of Humane Society Legislative Fund.

“We are grateful to the House champions—Reps. Steve Cohen, Brian Fitzpatrick, Jan Schakowsky and Vern Buchanan—and to all who cosponsored and voted for this bill, as well as to Energy and Commerce Committee leaders Frank Pallone and Cathy McMorris Rodgers and House leadership for bringing it to a floor vote. The Senate should follow suit quickly to get the PAST Act over the finish line and USDA should note the broad bipartisan support for stronger enforcement to end this torture.”

“For over half a century, animal abusers in the Big Lick faction of the walking horse industry have managed to evade enforcement of the Horse Protection Act and continue their cruelty unabated—it’s long past time for it to end. Thousands of walking horse owners and others have worked side by side with us to abolish soring and the economic havoc it has wreaked on this breed,” said Keith Dane, senior director of equine protection for the Humane Society of the United States.

Dane is a former director of the Tennessee Walking Horse Breeders and Exhibitors Association and a lifelong horseman. He continues: “These advocates have worked tirelessly to reform the breed from within, but they also know that the PAST Act is necessary to codify protection of our horses. We celebrate this action by the House and strongly urge the Senate to finally bring this crucial legislation to a vote.”

In public opinion polls conducted in 2020 in Kentucky and Tennessee (the states where soring is most prevalent), respondents across all categories—political affiliation, gender, age and geographic region of each state—voiced resounding support for the PAST Act’s reforms (78% in Kentucky and 82% in Tennessee).

Founded in 1954, the Humane Society of the United States fights the big fights to end suffering for all animals. Together with millions of supporters, we take on puppy mills, factory farms, trophy hunts, animal testing and other cruel industries. With our affiliates, we rescue and care for tens of thousands of animals every year through our animal rescue team’s work and other hands-on animal care services. We fight all forms of animal cruelty to achieve the vision behind our name: A humane society. 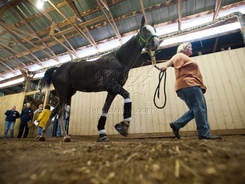