Physical traits such as size and conformation can help a horse excel at certain activities such as racing, jumping, endurance and heavy pulling. Bone structure is important in the ability of a horse to move. Muscles, tendons, ligaments, conditioning and training all contribute to a horse's athletic prowess.

Breeding has created some strikingly different body types ... that produce gaits most suited to the job of the horse.

Years of study and observation of horses leads most authorities to the conclusion that some movements and rhythms are hard-wired into the brain of the horse. In addition certain characteristics such as a long neck usually equates to a long stride and a moderately long back may be an advantage in a jumping horse although a short back is often deemed more desirable.

With pasterns as shock absorbers, long pasterns are sometimes considered best, but too much length can weaken the leg.

One notably important conclusion drawn about horses is that the horse's desire can often supersede its physical limitations, opening new possibilities for many horses, riders and trainers.

Another important conclusion drawn from years of study of horses is that different functions require different body mechanics. With this in mind, breeding has created some strikingly different body types that produce the patterns of movement and gaits most suited to the job of the horse.

All horse gaits can be roughly categorized into two groups: natural and ambling. Natural gaits occur in nearly all horses without any special training to encourage that particular pattern of movement. These "natural" gaits in increasing order of speed are:

All four of these natural gaits are seen in wild horse populations and occur in nature in all horse breeds.

Ambling gaits include a collection of several smooth footfall patterns that often require special training of the horse before a rider can command them. Some individual horses and certain breeds may naturally have certain ambling gaits, but training is usually required for consistency and to take full advantage of the gaits.

Typically, the major ambling gaits include:

Another method of classification uses the categories of:

Whatever classification or categories are used, a consensus exists about what constitutes the different variations of gaits. 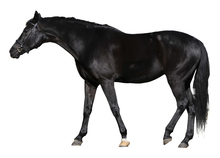 The walk is a comfortable four beat gait.

In the walk, the horse puts each foot down one at a time, creating a four beat rhythm and averaging about 4 miles per hour. At a walk the hose will always have one foot raised and the other three feet on the ground except for a brief moment when weight is being transferred from one foot to another. The horse moves its head and neck in a slight up and down pattern that helps maintain balance.

The trot is a two beat gait that may be uncomfortable for the beginning rider.

In the trot, one front foot and its opposite hind foot come down at the same time, making a two-beat rhythm. The trot has a wide variation in possible speeds, but averages about 8 miles per hour. A very slow trot is sometimes referred to as a jog. The trot is the working gait for a horse since horses in good condition can maintain a working trot for hours.

Because the trot is such a safe and efficient gait for a horse, learning to ride the trot correctly is an important component in almost all equestrian disciplines.

Since each time the diagonal pair of legs hits the ground, the rider can be jolted upwards out of the saddle, most riders 'post' to the trot by rising up and down in rhythm with the horse to avoid being jolted. Posting is easy on the horse's back, and, once mastered, is also easy on the rider.

The lope is an asymmetrical gait (left lead or right lead). This three beat gait is fun to ride, but can be unnerving to beginning riders.

This distinct three beat rhythm followed by a rest and then immediately afterwards a recurrence of the three beats followed by another rest is easy to distinguish. The lope is a western term for canter.

The gallop is an asymmetrical high speed four beat gait. This gait is thrilling for the rider and during the suspension phase when all feet are off the ground it feels like flying.

In the gallop, the basic canter movement is sped up so that all four feet are off the ground for a suspended moment. It is the fastest gait of a horse averaging about 25 to 30 miles per hour and is used in the wild when the horse needs to flee from a predator or cover a short distance quickly. Most horses need to rest after galloping for more than a mile or two. 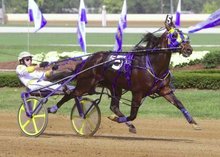 Standardbred and other breeds of horses can pace at a very high speed, making them popular on the race track. Notice the legs on each side moving in tandem.

The pace is a lateral two-beat gait with the two legs on the same side of the horse moving forward together. As in the trot, two feet are always off the ground. Pacers are usually faster than trotters on average. A slow pace can be relatively comfortable as the rider is lightly rocked from side to side. A fast pace is uncomfortable for riding and difficult to sit because the rider is moved rapidly from side to side. 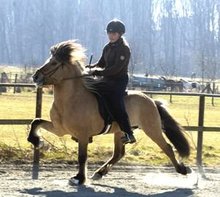 This unusual gait allows the horse and rider to cover large distances comfortably.

These are a number of four-beat intermediate gaits with differences in footfall patterns and speed. Historically they are grouped together and horses that are able to do an ambling gait are referred to as "gaited." These gaits were developed in these breeds by people interested in making distance riding more comfortable.

Among gaited horses, the American Saddlebred horse developed in Kentucky, and the Tennessee Walking Horse, developed for southern plantation owners who needed to cover the ground of their plantations in comfort and with speed, are two of the most popular horses.

Other gaited horses include the Icelandic Horse which is a sturdy horse with its roots in Viking history which possesses a gait known as the tolt, which is similar to the Tennessee Walker's running walk. Some Icelandics also have a gait called the flying pace where the legs on each side of the horse move in unison.

Rapid-fire foot falls are characteristic of this amazing and beautiful gait.

Another gaited breed is the Paso Fino which was originally created by crossing Spanish Andalusians with the now extinct Spanish Jennets over two hundred years ago.

The Paso Fino horses are noted for their paso fino, paso corto, and the paso largo gaits. Each gait varies in speed and is a four-beat lateral gait with each foot hitting the ground separately and the legs on each side moving in unison. These gaits provide an extremely comfortable ride and cover considerable ground in a short time.

Peruvian Pasos are another gaited breed with three gaits: the paso llano, the sobreandando and the huschano. These gaits are a four-beat lateral gait that is comfortable while covering long distances, and these horses can maintain these gaits for many hours.

Needless to say, the devotees and followers of various breeds of horses, whether gaited or natural, are attracted by the patterns of rhythm and the movements of each of the breeds.

Equine pawing actions and their meaning

In addition to the rhythms and patterns of gaits, horse's are known for using their limbs to communicate with each other and with humans in other ways. Pawing is one of these ways.

Horses normally paw from frustration or impatience and it is important to pay attention to their pawing, not only for its meaning, but also to prevent the damage that a pawing horse can do in its environment.

Basically the horse has one of five objectives in mind when it uses its hoof as a signal or paws:

No matter what activity a horse is engaged in on any given day, close attention to its movements and rhythms can give the handler or rider a great deal of insight into where the horse is coming from and what its attitude is at that moment.

If you already have a horse, is he suited to the things you want to do or is it a "bad fit" because of the horse's inclination to act and move in a certain way because of its breed and its physical strengths?

By becoming informed about the various horses out there, how they move and what their best accomplishments are, you are in a position to make good choices whether looking for a new horse or simply enjoying the one that you already have.

Is your horse eating your barn …