Some horses are wary about having their head or ears touched. This can make them hard to halter or bridle, and they may try to jerk their head away. Horses are not born head-shy; this is a self-preservation response. The horse may have a physical issue that is causing pain, or is remembering pain or a bad experience and doesn't trust anyone to touch his head, or certain areas of the head.

He may have a sore mouth and doesn't want his mouth handled. Ear ticks may make the ears sore, and he resists having the ears handled. A head-shy problem may stem from a medical issue, in which case you need your veterinarian to check his ears, or mouth, to see what is causing the pain and resistance.

Horses can become ear-shy or head-shy for many reasons. Some don't want their head touched, or just their mouth, or their eyes. Resistance may have started when the horse needed medication, and the frustrated owner had to fight with the horse to get the job accomplished. Someone may have handled his ears roughly during bridling, or the bit hit his teeth while being unbridled.

Sometimes you have to guess at what is making him resist. If it's a horse you raised, if you think back, you might remember when the head-shy problem started -- with an accident or bad situation that caused him to develop his fear, or your own mistake in handling him.

If it's a horse you bought, and don't know his history, you may never know the cause of a head-shy problem. Sometimes you'll get a horse that had a bad experience and has gotten over it, but some little thing may trigger that memory and now he is back to being head-shy again. Whatever the original reason for resistance, it may take patient effort to get the horse past a head-shy habit.

First, he must learn trust, and this can be a slow process. Take time to work on this problem a little every day, and start slowly. Don't try to put a halter or bridle on him until you've got him past being head-shy.

Any work you've done toward easing his fears will be lost if you have to fight with him to halter or bridle him, and you'll have to start over again. It will be harder the next time because he is now convinced that it's a bad thing, and he refuses to cooperate.

Some horses are OK to halter, but difficult to bridle if you have to handle their ears. If a horse is head-shy about putting on a halter, you may have to work with him for a while with just a rope looped around his neck to hold him.

If he is evasive and you need him haltered to work with him, you first have to get that halter on and leave it on for a few days or weeks, so there is no confrontation. If you leave a halter on, make sure it fits properly and that there's nothing in his stall, pen or pasture it could catch on. Then you can work on his phobia gradually, without having to actually halter him.

Obviously, you can't do that with a bridle, so you might have to find a way to ride without a bridle.  You might ride with a halter and lead lines, or hackamore if the horse is resisting a bit being put in his mouth. If the problem is ears, put the bridle on without touching his ears. Some bridles can be unbuckled on the side and you can put the headstall around behind the ears and then fasten the side.

If the horse is ear-shy, avoid handling the ears at all; start by rubbing his neck. Move your hand closer to the ear and then back again, then a little closer to the ear, and back. Gradually keep working toward the ear. It may take several days before you can actually touch the ear.

The key is to do this exercise many times. Eventually you can get your hand up behind the ear and then retreat, and finally the horse realizes you are not hurting him when you briefly touch his ear.

If he becomes tense as you touch the ear, you want him to relax again. Never end the session when he is tense.; Continue until he is relaxed, even if it means stroking the neck at a safe distance from the ear until he relaxes. Then he won't remember it as a tense situation.

Repeat this lesson several times a day, working closer, and eventually you can touch the ear and back right off again, and keep doing this. If you are not in a hurry, each advance and retreat - several times per location - enables the horse to become comfortable with the repetitions and realize he is not being hurt.

Some horses take longer to overcome ear/head phobias because they were inadvertently taught that if they keep resisting, eventually people will quit trying to touch or handle the head or ears. The person gives up and stops. 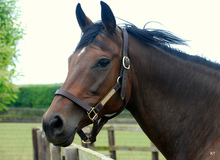 Desensitizing to the Halter

Safely leaving a horse with a halter on facilitates catching and desensitizes the horse to objects touch the face and ears. This halter needs to be tightened a little for safety.

It is important to go slowly, and stay relaxed. Don't work with the horse when you are tense or in a hurry. Do training sessions often, more than once a day. Add this to your daily grooming routine, and any other time during the day that you have a chance to handle the horse - at feeding time, or whenever you catch or handle him for any reason.

The horse will get over his fear faster if you do it often and there are not many hours or days between sessions. Increase the horse's familiarity with being touched, and expand his comfort level so he can trust you.

When you start the next session, don't start where you left off the last time. Start lower on the neck again, if you're working on ears and gradually work up again. You want the horse to be completely relaxed as you start, and not fearful or suspicious.

To keep any horse from becoming head-shy, move slowly around the head (no fast motions). If you touch his head, start and end in a positive way. If you have to treat an eye or ear problem, when finished go back to something that's positive and not upsetting to the horse so he can relax. This may mean stroking the forehead, massaging the neck or face - something the horse enjoys.

He won't totally forget the bad thing, but he won't associate head-handling with a bad experience, thinking that every time a person comes close to his head something bad will happen.

Every time you work with a horse, try to make sure he is comfortable and has trust in you. Never do something that would risk losing that trust. If it's something new that he hasn't experienced before, such as clipping, go slowly and take baby steps to get there, so the horse learns you are not going to hurt him.

One Method Does Not Work For All Horses

Imprinting and Training Young Foals – Do it Right