Good job that you are prepared to resolve this problem! Social problems like this aren't common, but since they can be dangerous they do cause a great deal of stress all round.

What to do about it really depends on what's causing it and what resources you have at your disposal.

Generally horses get on better when there is plenty of space and access to resources such as food, water, shelter from all kinds of weather, grooming buddies and playmates, and the right amount of human attention (I guess it goes without saying that this varies from horse to horse!). Resources need to be predictable and controllable to ease frustration and anxiety about them.

Horses have certain preferences regarding their herd mates. This horse is obviously displeased by the approach of the other.

Naturally aggression is the most obvious sign of horses not getting along and it occurs more often when there is less space and limited resources e.g. one hay feeder when two would be more comfortable, or too small an area of hard, dry standing to loaf about and swish flies.

There are other, more subtle signs of tension within the herd too, such as any individual spending more time apart from the group, and higher levels of mutual grooming which helps to relieve tension and strengthen bonds. I saw this when studying semi feral pony behaviour in the UK where management by breeders means that stallions are only temporary herd members during the breeding season. Mares who wouldn't live together at other times of the year have to tolerate each other in order to access the stallion. There might not be out and out aggression in these cases, but these are signs that the horses concerned are coping with each others' company, not necessarily enjoying it. If they had the choice to be elsewhere, then they probably would be!

The first thing that I suggest you do is identify the problem animals: which one is the most aggressive, which one is the loner (if any)? You need to pay special attention to what these horses appear to be fighting over.

Then audit your herd's resources: Is there enough food, water and shelter? Can all the horses access them comfortably at the same time or are some time-sharing them? If there isn't enough or if they are not well spaced provide more of whatever resource is in short supply: more hay feeders, water troughs or more shade. Whichever it is. Permanently providing more resources should see any aggression settle down over a two to three week period once the horses have established there is consistently more to go around and stop worrying. I have successfully integrated a hungry off the track Thoroughbred into an existing herd of two in a small yard over winter in wet West Wales by making sure that there was more than enough haylage to go around.

Also audit your herd's social resources: Are the problem horses competing to access a third horse such as two male horses (gelded or otherwise!) fighting over a mare? I have seen this happen in a mixed herd of mares and geldings, one gelding took on the harem stallion role, despite not even being a rig! All bar one of the other geldings stayed away to keep the peace, but one little gelding kept coming too close and was chased as persistently as he pestered. He had to be removed from the herd and placed with a few calmer geldings. If you have a similar case you may well have to split your group of five into a group of two and a group of three in order that the problem can be resolved. Since our horses often don't get to choose who to live with, they can struggle to resolve serious disputes when they have to live close to a horse they do not like or are afraid of.

Look at your horses' responses to you too, since we can often be a resource as well as having a particular relationship. For example, do your horses link you to feeding if you come at a particular time of day to do that? Do they expect attention from you such as petting or hand feeding? I would suggest that feeding is done in a specified order each time, from the most competitive horse first, to the least pushy going last – respecting their natural hierarchy over this particular resource. Also be mindful of how you give attention, speak to and pet your horses when they are calm and not soliciting attention. This way one horse's attention seeking behaviour doesn't alert the others to the potential for this resource, accidentally encouraging fighting. Also give your horses a clear signal for no more attention, such as showing them your palms and then giving them no more attention until they are calm, relaxed and doing their own thing.

Resolving this kind of issue is a case of identifying the culprits, examining what triggers the anti-social behaviour, removing it or providing more of it as appropriate, and allowing a few weeks for the problem to settle down. If you don't get more settled behaviour in this time it is possible you won't get it at all. I had one unfortunate case in which a pony gelding was being aggressive to horses and people around hay and bucket feed. Despite making these resources more available to all and carefully teaching him that his food would be given to him when he stood back and relaxed, this pony didn't get better. He was euthanased and on necropsy it was found that he had a brain tumour which was the most likely cause of his emotional problems. 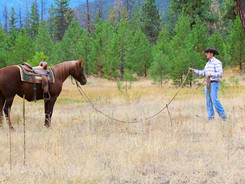 One Method Does Not Work For All Horses

When mounting, how do I calm my nervous, fidgety horse so he …

Mutual Grooming in Horses - You Scratch My Back, I'll …

Dealing with the Barn Sour Horse