Ears pinning is a signal that your mare is threatening or feeling threatened by whoever is approaching, or in fact both of these things! We'll be able to deduce how to make her happier as we examine her reasons for such grumpy, fearful behavior - assuming that you have ruled out medical reasons with your veterinarian.

First of all, horse behavior patterns have evolved to fulfill a particular purpose in the natural world. Even though horses have been domesticated (subject to captive breeding programs) for thousands of years, most of their natural behavior has remained intact. Evidence for this is their ability to go feral; when domesticated animals return to free living and the pressure of natural selection. The American Mustang is the classic example. 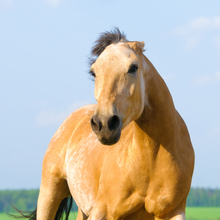 When a horse lays its ears back, it is signaling fright or anger, or a little of both.

Pinning the ears protects them from being bitten off during predatory attack, or by other horses in a fight e.g. over valued resources such as sexual partners, since it is stallions that more usually fight in this manner. Ears automatically pin back whenever the horse feels particularly threatened or angry.

Both fear and aggression, and their specific behaviors are mediated by the amygdala – found in the limbic system, a part of the brain where emotions are processed. The scientists who work on the neural bases for emotion have long recognized that stimulating feelings of frustration can also stimulate fear and vice versa, so fear and aggression need to be discussed together. This is why I have suggested that your mare feels threatened and needs to engage in threats herself.

Since it is being approached that causes this behavior, it is this that makes her feel angry and defensive. Since humans don't bring this out in every horse, your mare has learned that human approach can bring something else that is unpleasant with it. This is where we need to turn detective; which significant event(s) does human approach predict?

Are you or others doing something which causes pain, or frightens your horse? This can be anything from having to administer to a painful injury, a saddle that pinches, the aids used in training, or reprimands for unwanted behavior. Some horses get sour because they anticipate that human approach will bring harsh, frightening treatment, a yell or a slap. They act aggressively in apprehension, but because of this they end up getting that predicted treatment! It's a self-fulfilling prophecy.

How can you tell if anything is causing your mare fear? Be aware that your mare may only give you subtle hints e.g. increased facial tension making her chin look pointy, a clenched jaw jutting her lower lip out, furrowed eyebrows and triangular shaped eyes, fast, shallow breathing and so on. It is usually when these subtle hints fail that horses escalate to more violent means of fight or flight.

Aggression stemming from frustration is our other possible explanation, so also ask, what causes her frustration? Do you or others curtail her ability to gain rewards or solve training puzzles? How are her living conditions? Is she free to be a horse? Can she freely participate in selective browsing on a variety of plants for most of the day and night? Interact with other horses including mass grazing and sleeping, mutual grooming, and play?

Lack of ability to predict and control these important, natural and normal behaviors causes chronic stress, and greater reactivity to even small irritations. If you are using any of these natural rewards in training, e.g. food, be sure that your mare does understand when food rewards are on offer and when they're not, as well as how to get the food reward so there is no added frustration over this important and desirable resource.

However, using food rewards will make you more attractive to your mare, she will associate you with pleasurable feelings and begin to great you with a happier attitude. Research has shown this to be the case in riding school ponies and young horses. However it can take time for some horses who have previously associated people with feelings of fear and/or anger to completely change their attitude. You may need to seek expert help from someone experienced in employing reward based training in this way.

Returning to the list of possible causes, you can also cease any that are unnecessary – that do not serve a useful purpose for either your horse or for you. Those that are necessary but cause fear, because your mare would avoid them if she could, need to be dissociated from actual fear and pain through 'systematic desensitization'.

Present them in dilute form, without arousing more than a transient flinch or tightening of the facial muscles, until your mare doesn't appear to respond at all. Make sure this is her own choice, avoid inescapable situations and remove them while she is still relatively calm.

She'll learn that this behavior will make them go away, the thing she'll want most at this stage. Once this is accomplished proceed to 'counter conditioning'; pair those stimuli with reward just before removing them, so that your mare acts in anticipation rather than in apprehension.

Anything that causes frustration also needs to be addressed. Can your mare's living arrangements be better? Changes range from a new boarding facility to simple environmental enrichments, see my You Tube video:

I have already promoted the benefits of reward-based training as well as cautioned the pitfalls, but it is also important to note that pressure-release methods tend to leave horses associating trainers with pressure because the release is simply that, a relief from something aversive. The fact that the pressure must be there to be released overrides any positive effect that the release may bring about in terms of how horses feel about their trainers.

Essentially, lose all the negative things possible from your mare's life, and make the rest as positive as you can! 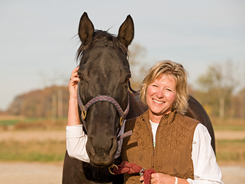 Mutual Grooming in Horses - You Scratch My Back, I'll …

Imprinting and Training Young Foals – Do it Right

Dealing with the Barn Sour Horse