Why train a young foal

Many horse breeders handle newborn foals to make them easier to train later, and more user-friendly for the farrier and veterinarian, using a method called imprint training. The very young foal is able to soak up a large amount of information, learning from the surroundings and early experiences. Prey species (deer, horses, geese, etc.) are more precocious at birth than the young of predators and humans.

Soon after birth or hatching, young horses or geese can follow mom and flee from danger. Their senses are fully developed. The horse's most critical learning period occurs in the first days of life--profoundly affecting his attitude and personality, according to Dr. Robert M. Miller, the California veterinarian/horse breeder who developed a method of imprint training during the 1960's.

When first born, a foal does not fear humans, and can be programmed to tolerate and remember many things. After that short window, he becomes more like an adult horse -- suspicious of changes in his environment, wary of new experiences or unfamiliar creatures that might be predators.

The most advantageous time to make a lasting good impression and beneficial training is right after birth. If you control what he sees and experiences, you can have a long-term positive effect; he will be much more tolerant of the handling he will have later.

When to start imprinting

It helps to handle the foal right after birth so he has the smell, touch and appearance of humans stamped on his brain, assuring him that future encounters with humans can be accepted and not feared. He can be exposed to experiences he'll be expected to tolerate later, such as foot handling, grooming, touching under the tail, handling mouth and ears, the sound of clippers, being led, etc.

Training is done in many sessions -- first while the foal is still lying down, before he gets up to nurse the mare. Subsequent sessions are done standing, after he has nursed.

Some people start by rubbing the foal with a towel all over his body, then hand rubbing the parts a horse usually is most resentful about such as ears, poll and muzzle. It also pays to rub the foal's legs and tap the soles of the feet, to mimic what a farrier would do.

Gently putting a lubricated finger into the rectum gets the foal accustomed to this sensation; some breeders like to take temperatures twice daily on every foal - to monitor health as well as for training.

During the first weeks of life it also pays to pick up their feet and give them a quick grooming, touching hocks, knees and ankles. This helps desensitize them for when you need to pick out their feet or have the farrier trim them.

You can also fill a small syringe with water and put it into the foal's mouth. This makes it easier when you have to deworm him. He becomes used to water being squirted into the mouth, and tolerant, and is not apprehensive about a dewormer later.

"The earlier the training begins in the life of a horse, the more effective it will be, if done properly. If done improperly, it may do more harm than good because the learning at this stage is so fast and so lasting," says Miller.

Beware - Do no harm

If imprint training is done incorrectly, or too hurried (not continuing each step until the foal completely relaxes and accepts it), your purpose is defeated. If the foal is a timid individual he may still be apprehensive about certain things if you quit too soon. If he is an independent, dominant individual and you halt the session before he completely submits to having a foot manipulated or his ears handled, you merely reinforce his strong-willed determination to resist humans.

If you are working on an ear or flexing a leg, and halt before he tolerates this handling, he will have learned to jerk his head or leg away whenever you try to handle it later. Each step must be continued until the foal is totally passive about it, explains Miller.

"Most foals are naturally submissive and still end up as gentle and compliant horses even if improperly imprinted. But if a foal is highly dominant and willful, or very flighty, and the procedure is done improperly, the foal will learn undesirable behavior," Miller says.

The most common mistake is rushing the first training session. A foal becomes sensitized to stimuli (body handling, the sound of clippers, etc.) instead of desensitized, and therefore fears and resists these things instead of accepting them.

The second most common mistake is to omit or inadequately perform subsequent lessons. Miller likes to do these on alternate days for a week or two. During these sessions the emphasis is on control of movement, teaching the foal to move forward, back, sideways on command, to rotate on forehand and hindquarters, to lead willingly, stand patiently.

Horses establish their dominance hierarchy by controlling the movement of their peers--making a subordinate individual move, or inhibiting movement. If you control the foal's movement, you impress on his mind that you are the dominant one in his life, and he must be submissive to you.

"Omitting the lessons in control of movement produces a foal that is tolerant of body handling, but disrespectful. Properly doing these lessons will consistently produce a responsive, respectful, obedient horse," according to Miller.

By instilling in the young foal that he must respect restraint (standing quietly while contained by your arms) and must move when you ask him to move (encouraged by a little come-along rope), he learns that you are in control of his movements.

When he grows up he will be obedient and respect your dominance. He will be well mannered and compliant rather than balking or charging ahead when led at halter, or stepping on your toes when you want him to stand still.

He won't resent restraint or be afraid of having various parts of his body handled by the veterinarian or the farrier. Control of his movement is the essence of training and can be accomplished in the first days of life if imprint training is properly done.

is available on Amazon. 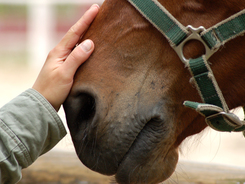 Should colt starting be a competitive event? - EquiMed Asks

When mounting, how do I calm my nervous, fidgety horse so he …