Phenylbutazone (“bute”) is an anti-inflammatory drug—a non-steroidal anti-inflammatory drug (NSAID) similar to aspirin, Advil, Motrin, Banamine, etc. Bute has been used for many decades in horses to relieve pain, particularly in musculoskeletal injuries, navicular syndrome, arthritis, etc. It has been a comparatively safe and effective way to reduce pain and inflammation.

Veterinarians prescribe bute for a wide number of problems, but horse owners should be aware of possible side effects, similar to some of the side effects when using pain relievers in humans.

Most people can tolerate aspirin or ibuprofin once in a while, but some individuals cannot. The same is true with horses and bute. There are also risks when using these drugs at too high a dose or for too long a duration.

This drug can be very helpful, but giving more than the recommended dose won’t provide more benefit. Giving an increased dose can, however, result in more side effects, and may be dangerous. Horse owners should try to administer the lowest dose that gives relief to the horse. Giving more may cause adverse side effects which include gastric ulcers, kidney dysfunction, and on rare occasion right dorsal colitis.

Gastric ulcers are the most common risk. Some horses probably won’t get gastric ulcers no matter what we give them, just as some humans can tolerate continual use of aspirin with no problems. But often the horses receiving the most bute, most frequently, have other risks at the same time (such as stress and pain associated with the condition we are treating) that also make them more prone to ulcers.

A drug like bute is a risk factor for gastric ulcers, but so is any kind of stress. This could include the problem being treated, or even being confined in a stall or changing the horse’s routine and restricting activity. Horses at risk for gastric ulcers should probably receive a different drug, or be given a protective product, such as omeprazole, along with the bute.

A less common side effect of bute, and more serious than gastric ulcers, is right dorsal colitis, which causes diarrhea and sometimes fever.  Kidney failure and liver damage is another possibility when overusing bute, such as giving too high a dose for multiple days.

Even worse is accidentally giving the entire tube of bute paste in one dose.  The tube is calibrated for multiple dosings and you have to change the setting to give the correct dose. If you give it all at once you will make the horse very ill.

If this ever happens, it’s a serious emergency. Call the veterinarian immediately to save your horse’s life. The vet could flush some of the drug back out of the stomach with water (using a nasogastric tube) and administer something like charcoal to help absorb some of the rest of the bute so it can’t be absorbed.

The vet might also start the horse on IV fluids to make sure the kidneys are well flushed.  Any horse that gets an accidental overdose should also be given gastric protection such as omeprazole.

Read labels and make sure you are giving the correct amount—whether pills, powder or paste. Pills have an advantage because you the dosage is specific (you are less likely to accidentally give too much). One tablet is one gram. These can be crushed into a powder to add to feed, though most horses don’t like the bitter taste.

It’s easier to just dissolve the pills in a little warm water and add some molasses or applesauce to give by oral dose syringe. Any horse that tolerates deworming paste will usually tolerate oral dosing with dissolved bute with molasses added.

Today there are several formulations of bute powder, but they may have varying concentrations. In some brands a tablespoon may contain a gram of bute, and in others a teaspoon equals a gram of bute. This can get you in trouble if you can’t remember what the dosage should be.

Always keep labels from packages, and read them before administering the powder. And if the label says to give one scoop, don’t lose the scoop.

If you own a horse that has trouble with bute, don’t use it. Today there are some alternative anti-inflammatory drugs available that act a little differently and don’t produce some of the side effects that bute may cause. Consult your veterinarian regarding alternatives.

The possible side effects that can occur with bute are the reason it should only be given to a certain horse in a certain dosage, as recommended by your veterinarian to treat a specific problem.

It is a comparatively safe product, however and has been used on thousands of horses for many years.

When using bute or any other NSAID, however, take your horse’s temperature before you give the drug, not after. Anti-inflammatory drugs will lower a fever, and may also make the horse feel better and mask the pain of lameness.

If you later call a veterinarian to come diagnose a problem, the vet might not get a true picture of what is going on with the horse when he/she takes its temperature. If your horse is lame, don’t give bute before you call the vet to diagnose it. He/she must be able to see the lameness to pinpoint the problem. 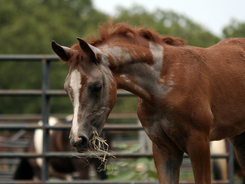 Spring into Summer: 10 Tips for Your Horse Part 2

What Every Horse Owner Should Know About Caring for Senior …