With the numbers of neglected, abandoned, or mistreated horses steadily rising and cresting at 100,000 annually, even healthy equines without disability or behavioral problems may end up on the unwanted list. Those fortunate enough to be shielded from future harm present a host of challenges for emergency facilities like the Santa Fe Horse Shelter. 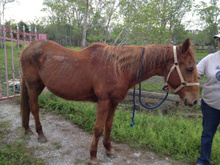 The many needs of the rescued horse

The neglected horse has many needs including critical care for any wounds, curling or cracked hoofs, dental and skin problems, and deworming as well as a carefully developed refeeding program, plus gentle, kind human interactions along with a gradual increase in exercise.
© 2015 by Habitat for Humanity

Open or untended wounds and cracked and curling hooves certainly indicate some form of neglect, but evidence of sustained hunger in a horse is hard to deny. In cases of a severely malnourished or starving horse, its skeletal ribs or hip bones protrude unnaturally. Listless ears and a nearly motionless frame tell a devastating story of a horse's efforts to conserve any energy left in its emaciated body.

The process of starvation in a horse mirrors that of a human suffering from anorexia or cancer. If the body fails to ingest sufficient nutrients for brain performance and organ function, it consumes stores of fat and carbohydrates to supply the energy needed to maintain its internal systems. A regularly fed horse replaces these nutrients from food. A starved body, once fat and carbohydrate stores wane to nothing, raids its own tissues for protein - the only other source available for its survival.

Protein is a component of every tissue in the body though unlike fat and carbohydrates no stockpiles exist. Consequently, a starving horse attacks any source of protein available including vital organs such as the heart and its compromised gastrointestinal system. In essence, a starving horse turns on its own body and consumes itself to survive.

Guidelines for the care of rescue horses

Noting the need for consistent and measured strategies to address the epidemic of neglected horses, in 2004 the American Association of Equine Practitioners released a comprehensive set of guidelines for rescue facilities that play a vital role in the safety and rehabilitation of unwanted animals.

In a nut shell, it takes an entire community behind a horse rescue to make it successful.

Protocols outlined by both the AAEP and the New Mexico Livestock Board serve as a starting point of care administered by the Santa Fe Horse Shelter. To be accepted by the shelter, each horse must arrive with a travel permit or a bill of sale, and a negative Coggins test. Once the shelter accepts an intake, individual horses are quarantined from resident ones for thirty days to contain any disease, illness, or parasite. Any evidence of a reportable disease is conveyed to the livestock board.

After a veterinary evaluation and exam, the name, age, and gender of each horse as well as a description of any issues detected is recorded. The status of a horse upon its arrival determines when to begin a series of vaccinations and a deworming program as well as dental and farrier care. Stallions are castrated.

Providing food to an impoverished animal is a natural instinct for many, but according to Michele Wolford, ranch manager and volunteer coordinator at the Santa Fe Horse Shelter, transitioning a horse from the starved stage to one of health is often mired by the best of intentions. "Your heart says give the horse as much as he wants to eat, but the reality is you can kill it with kindness, cautions Wolford."

If your horse is very thin due to starvation, you will want to proceed slowly and with caution, giving his body a chance to adjust to change with each step. Some horses are in such poor condition they are unable to eat. In this situation, your veterinarian will use a stomach tube to feed the horse as a short term procedure with the goal of getting your horse interested in eating again.- Dr. Getty - Horse Nutritionist

Refeeding syndrome develops when a horse is given concentrated calories too quickly, first disrupting the metabolic system before leading to heart, respiratory, or kidney failure. Researchers at the University of California at Davis designed a nutritional program to minimize the effects of refeeding syndrome with a focus on slowly stabilizing a horse's weight.

In line with the program recommended by UC - Davis, the Santa Fe Horse Shelter's nutritional regimen begins by feeding affected horses frequent, small amounts of high quality alfalfa to reintroduce the protein and electrolytes necessary for a normal metabolism. An emaciated shelter horse receives one pound or a 1/6 of a flake of hay every four hours for the first three days.

During days four through seven, the amount of hay given at each feeding inversely shifts with the number of daily feedings. Ideally, by day six a horse consumes four pounds of hay every eight hours.

By increasing the amount of hay given per feeding and reducing the number of times a day a horse is fed its systems are allowed to recover safely. Ready and continual access to clean and fresh water throughout the program is a must.

On the road to health

By day ten, a shelter horse emerging from ill health receives as much alfalfa as it will eat twice a day. No grain, apples, carrots, or supplements may be given until the horse demonstrates it is well on its way to recovery.

Depending on a horse's progress, over time, age appropriate grain will be added to the diet to speed up weight gain. The Santa Fe Horse Shelter feeds three different grains: one for mares with foals to facilitate proper growth; a feed for adult horses to maintain a healthy weight; and a third with a higher fat content at is easier to chew often for older horses and those with missing teeth.

Still, steps in rehabilitation of a neglected horse do not end with nutritional support. A regular deworming program, dental exams twice a year and therapeutic hoof care also contribute to the success of transitioning a horse from a neglected to a healthy state.

A critical factor in a horse's survival is kind human interaction, too. Gentle grooming coupled with short walks in the sunshine helps a horse regain its trust in the human race.

"Even if an old timer is haltered, groomed and taken for a short walk once or twice a week, I see a happier and brighter individual. I think they need purpose just as much as we do," reasons Wolford.

With up to eighty horses on site and an operation of only three and a half positions when the shelter is fully staffed, volunteers serve as a huge resource in the exercise, training, and grooming of horses, Wolford emphasizes."We all have a great time working with the horses. It is very special to see a volunteer have a break through with one of the horses. It is just as special to see a horse begin to trust again."

After months and even years of neglect, horses often begin to rebound within the first two weeks of responsible care. Engaged ear movement, a softness or curiosity in their eyes, and normal carriage of the head and neck appears as the first noticeable improvements. Weight gain comes more slowly, but within three to five months of rehabilitation a horse can reach its normal body weight.

The body condition score, a numerical method for assessing a horse's degree of body fat, provides a consistent measure of an animal's physical wellbeing. Scores range from one, indicating a starved or emaciated animal, to nine, evidence of an overweight horse. A score of three indicates a nutritionally deficient horse, too, while a score of five or six is optimal for health.

It takes an entire community of care for shelter horses

Finding an appropriate forever home for shelter horses requires not only appropriate nutritional and veterinary care. Basic training on the ground and in the saddle complements these efforts. "The more training, we have on our horses, the more adoptable they are. The more horses we are able to place into a good home, the more horses in need we can help," declares Wolford.

The two primary reasons behind horse neglect or starvation reside both in a lack of economic resources and a deficit of knowledge about an animal's needs. Yet, economic hardship and an impoverished mind cannot serve as an excuse for neglect and starvation of a horse.

Shelters can only do so much to guard against poor treatment let alone bring a rescue back to health. Perhaps, Wolford says it best, "In a nut shell, it takes an entire community behind a horse rescue to make it successful." 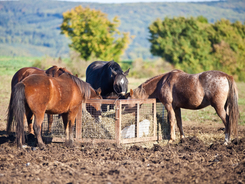 Hunger and Thirst and Your Horse

Helping Horses Survive and Thrive during Droughts and …

How to do a fecal wash