Almost every barn has dogs around. They may be "mascots" of the boarding barn, farm dogs, or dogs who come by when their owners stop to ride their horses. For many dogs, a high point in their day at the barn is being able to snag some hoof trimmings after a visit by the farrier.

Are hoof trimmings safe for your dog or dangerous? In truth, both answers are possible.

Horse hoof walls are made of special skin or epithelial cells that are keratinized. Keratin is a main component of hair, horns, and antlers, as well as hooves in cows, horses, etc. Theoretically, keratinized structures are digestible, though many a cat owner who has cleaned up hairballs would argue that!

When freshly cut, hoof trimmings and hoof shavings are flexible and somewhat soft. As the tissue dries, it becomes very hard and stiff, however. It is the drier, harder hoof trimmings that can present the most trouble.

Most dogs love to chew a smelly hoof clipping, but is it safe?

Dogs are attracted to hoof trimmings due to the odor. A bit of manure, fresh keratin cells, and the whole array of smells in the barn will bring your dog running when feet are being trimmed. Dogs who routinely alarm bark at strangers welcome the blacksmith with open paws so they can get one of their favorite treats.

All sounds good so far, so where do the problems come in? A variety of problems can arise from your dog eating hoof trimmings.

The most common problem is dogs biting or chewing off large pieces of hardened hoof. The sharp, hard pieces can irritate or even pierce delicate internal tissues in the esophagus, stomach, or intestines. Luckily, most dogs will vomit up indigestible hunks of hoof. Still, the sharp and hard hoof pieces can cause irritation both going down and coming up in those situations. This is most likely to occur if your dog finds a piece of dried hoof a day or so after the blacksmith has come.

Hoof that has sat around near the manure pile or even in a corner of the barn aisle may get moldy or develop bacterial growth. In those instances, a dog who swallows or chews on the hoof may also ingest some infectious agents.

One case mentioned in an online forum described a dog with seizure-like symptoms. Her veterinarian suspected a mycotoxin (poison from a mold or fungus) that caused the dog's signs. Luckily, she recovered after vomiting up a chunk of hoof that was most likely the cause. 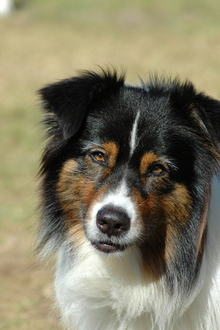 Dogs and horses are a common combination. Take precautions to protect both species if allowed to associate in the barnyard or on the trail.

Remember that your horse has been walking around on that hoof. The hoof may have ingrained manure, dirt, or fungal spores. If you have dogs with the MDR 1 genetic defect (so the dog has trouble safely metabolizing certain medications such as ivermectin), your dog can become ill from ingesting or chewing on hoof pieces that are contaminated with medications like ivermectin which may be present in the manure post-deworming.

Ivermectin toxicity is quite common among the herding dog breeds, which include many "barn dog" favorite breeds, such as Australian Shepherds and Border Collies. Temporary or permanent blindness, severe illness, and even death may result.

If your horse has recently been treated for thrush, the chemicals used in treatment may be ingrained or on the hoof trimmings. Some of these chemicals may be truly toxic. Others may simply be irritants to your dog's tissues in the mouth or the gastrointestinal tract. Either way, this is not a good scenario.

The same situation can occur with any hoof dressings or protectants that have been used on your horse's feet. None of the ingredients in these products are designed to be taken in orally.

There are commercial products that involve cow hooves (very similar to horse hooves in most ways) that are sold as dog chews. While many dogs handle these just fine, others vomit up chewed chunks or suffer from gastrointestinal tract irritation.

With all of these cautions, we come back to fresh hoof trimmings and the average dog. There have been no formal research studies looking at the pluses and minuses of canine consumption of equine hooves (or cow hooves for that matter).

An informal survey of dog and horse owners turned up a few problem cases, though most dogs apparently eat fresh hoof trimmings with no problem.

In the majority of cases, the dogs who had problems with ingesting hoof trimmings ate older, dried pieces of hoof. These trimmings are more likely to have bacterial or mold contamination.

The older hoof trimmings are also harder, tougher to digest and more likely to irritate sensitive tissues as they are chewed and swallowed. In a few cases, owners felt the dog had simply eaten too many pieces of hoof, but would have been fine with one or two pieces.

The conclusion? Most dogs have no problem chewing on small, fresh pieces of hoof trimmings. Letting your dog have a small "treat" from the farrier will be fine in most cases.

Sweep up and put the majority of the hoof trimmings in a safely enclosed trash can so your dog won't continue to snack on these and overeat. For the truly safest course of action, simply sweep and pick up all hoof trimmings and don't let your dog have any. 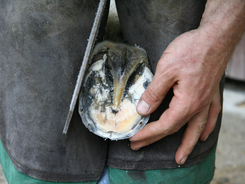 A Farrier's Work is Never Done

The Importance of Picking

Emergency Hoof Care for Your Horse