With over 9 million horses in the United States, equine breeding is not only a horseowner's personal endeavor, but also a multi-million dollar agricultural enterprise. However, for all the hopes and dreams realized in a foal's first steps, equine reproduction can be a frustrating and expensive process.

Horses traditionally have the lowest reproductive efficiency of all species of domestic livestock, with national foaling rates generally falling between just 50 to 60 percent of mares bred.

Over the last fifty years, techniques and technology in equine reproduction have evolved, and one of the most influential advances is the use of artificial insemination (AI). Artificial insemination is an assisted reproductive technique which consists of the manual depositing of live motile spermatozoa (either fresh, cooled, or frozen) into the mare's uterus at an optimal time for conception. 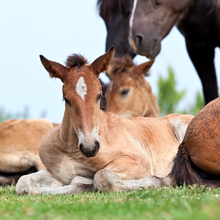 With national foaling rates generally falling between just 50 to 60 percent of mares bred, equine reproduction can be a frustrating and expensive process.

Once used primarily by veterinarians for horses with fertility problems, today AI has become a widely accepted practice for an increasing number of breeders around the world.

Why use AI when breeding horses?

The McGee Fertility Center, part of the world-famous Hagyard Equine Medical Institute in Lexington, KY, offers in-depth diagnostics for mares and stallions, as well as assisted reproductive services, and is a qualified Select Breeders Services Affiliate lab. As part of the Center's expert team of veterinarians, theriogenologist Kristina Lu, VMD, Dipl. ACT, specializes in equine reproduction and utilizes AI techniques on a daily basis. Dr. Lu noted that while the live cover of a mare by a stallion is still the most natural process, AI offers a plethora of advantages for breeders:

Advantages of AI in horses

Disadvantages of AI in horses

For the majority of AI collections, stallions are often teased with a live mare in estrus standing nearby.

The process of artificial insemination always begins with the collection of semen. For stallions, use of an artificial vagina (AV) fitted with a collection bottle is the most common method. In order to collect ejaculate in the AV, stallions may be permitted to mount a live mare, but this practice can be dangerous as well as result in an accidental impregnation.

For the majority of collections, stallions are trained to mount a "phantom," which is a padded frame about the size of a horse, often used with a live mare in estrus (or "in heat") standing nearby. "Use of a phantom is far and away the safest process for all parties, human and equine," explained Dr. Lu. "But a small number of stallions just don't 'take' to breeding the phantom and this can reduce the chances of being able to collect their semen for AI."

Once a sample is collected, Dr. Lu examines the sperm under a microscope and with Computer Assisted Sperm Analysis to evaluate several indicators of fertility, including total and progressive motility, total sperm number (a combination of volume and concentration), and morphology or shape of the sperm. If the stallion is being evaluated as a candidate for AI, Dr. Lu conducts trials to cool and/or freeze semen samples to determine how the process affects viability of the sperm.

From this point, semen arrives to the mare in one of three ways: fresh, cooled, or frozen. For AI using fresh semen, the mare and stallion are at the same location; semen is collected from the stallion and infused directly into the mare. For cooled semen, the ejaculate is often centrifuged to remove the seminal plasma, divided into several samples, and a substance called "extender" is added to provide a nutrient source and a buffer from the elements.

Cooled to 4 - 5° Celsius and then packed into specially-designed containers containing insulation and freezer jars for protection and to maintain proper temperature for up to 72 hours, cooled semen can be shipped via express service almost anywhere in the world.

Is frozen horse semen the way to go?

Once a novelty in the horse world, use of frozen semen is becoming increasingly common among breeders and is gaining favor with many registries. By definition, frozen semen has been frozen in liquid nitrogen at a temperature of -197°C, which stops all motility. If prepared and stored properly, including use of extender with cryoprotectant to protect cell membranes from the freezing process, semen may remain frozen indefinitely in special storage tanks and utilized to impregnate mares even after a stallion's injury, gelding, or death.

For performance horses, the versatility of frozen semen is a definite advantage.

The majority of stallions we work with are still actively competing. Semen can be collected at any time and frozen, then shipped to mare owners whenever they need it without any interruption in the stallion's training or showing schedule.~ Dr. Lu

Frozen semen is stored in surprisingly small .5ml plastic "straws," which allows for semen from a single collection to be divided into many doses. Immediately prior to insemination, straws are thawed in a warm-water bath at 37°C for 30 seconds, with exact precision required in temperature and timing to maximize sperm survival. On average, mares will be inseminated with 4 - 8 straws, with best pregnancy results achieved if inseminated within 8 hours of ovulation.

Frozen semen is stored in specially-designed tanks containing liquid nitrogen. Liquid nitrogen is VERY HAZARDOUS and extreme care must be taken as exposure can result in serious injury.

Only veterinarians and technicians experienced in handling frozen semen should handle straws and containers. Long-term storage containers must be carefully and continually monitored to ensure temperature remains constant. Any changes will initiate thawing and cause permanent damage to semen.

Even though about 30% of sperm viability is lost in the freezing process, and despite the small amount of semen used for insemination, AI with frozen semen can be very successful. "Technology is always advancing, such as ongoing improvements in the composition of extender," Dr. Lu said."Veterinarians are also becoming increasingly skilled and comfortable with handling frozen semen, and those vets who are experienced in precise AI methods do tend to get better pregnancy rates for their clients."

For instance, while traditional insemination is via a pipette inserted into or just through the mare's cervix, new techniques such as "deep horn insemination" allow semen to be deposited all the way through the uterus to the oviduct, increasing the odds of success with very small doses such as from frozen straws.

Management of mares in breeding

While the stallion may be doing most of the work, Dr. Lu emphasized that management and preparation of mares is critical with AI. A mare must be cycling normally, in heat, free of infection, anatomically normal, and not have degenerative changes such as fibrosis, which is often seen in older mares.

Mare owners also should think twice before attempting AI without expert assistance. "I believe you must have a veterinarian involved in the process in order to be successful with any type of AI," explained Dr. Lu. "It will ultimately cost less both financially and emotionally to manage a mare correctly with the help of your vet, than to not be as diligent and have repeated unsuccessful tries at pregnancies."

You may find Horse Breeding Methods: Pros and Cons helpful. 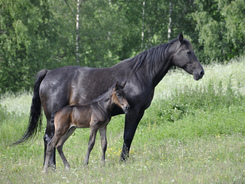