An understanding of the basics of reproductive timing and behavior is important to reproductive success. If you decide that breeding your horse is something you are prepared to do, it is important to recognize the behaviors associated with a mare in heat, a mare that is receptive to a stallion, mating, signs of foaling and normal behavior after foaling as well as the estrous cycle and how it can vary.

Before considering breeding your mare, a veterinarian should evaluate your mare and provide information about her reproductive potential. During this breeding soundness examination the veterinarian will do a visual inspection of the vulva and vagina of the mare and a palpation of the cervix, uterus and ovaries.

In some cases a uterine biopsy may be called for and your veterinarian may suggest ultrasonography, cytogenetic evaluation, measurement of reproductive hormones or possibly an evaluation of the reproductive tract using a fiberoptic endoscope.

The evaluation process may determine that your mare is ready for breeding, it may detect problems that will limit fertility and, on occasion, the examination may reveal chronic or serious problems that would indicate it would not be wise to attempt to breed the mare.

Horses are referred to as "long-day breeders" because they come into heat as the length of the days increases in the spring. Mares are "seasonally polyestrous" because they have multiple estrous cycles throughout the spring and summer.

Light is the controlling factor in mares coming into heat in early spring, although some mares may cycle during the winter months. Mares have light receptors in the back of the eyes that send signals to the brain to release hormones that initiate the estrous cycle. These hormones are follicle stimulating hormone (FSH) and luteinizing hormone (LH) and are produced by the pituitary gland at the base of the mare's brain.

With advances in science and technology, horse breeders can use synthetic hormones to control the estrous cycle and better manage breeding. Progesterone can be given to prevent a mare from coming into estrus and prolonging the diestrus stage of the cycle. After progesterone treatment is stopped the mare will come into estrus within a few days.

Older mares sometimes have difficulty maintaining pregnancy and the use of synthetic progesterone has enabled older mares to successfully carry a foal to term.

Many horse breeders want their mares to foal soon after the first of the year and use artificial lighting for 16 hours a day prior to the breeding season as a tool to facilitate the timing of foal delivery.

Typically during the breeding season a mare will have a 21 day estrous cycle which is the interval from one ovulation to the next. This length will vary between mares and time of year. The estrous cycle is divided into two periods, estrus and diestrus with estrus being the time when the mare is in heat, usually for 3 to 7 days. During diestrus, typically 14 to 18 days, the mare is unreceptive to a stallion.

Ovulation occurs one to two days before the end of estrus. Ideally, breeding should occur close to the time of ovulation. Breeding more than a day or two before ovulation or more than a few hours after ovulation is usually not very successful. The rule of thumb is to breed mares on the third day of eustrus and every other day until they go out of estrus.

Because estrus is so variable in length and because ovulation is more closely associated with the end of estrus, determining how often to breed your mare can be difficult. Hormonal induction of ovulation with human chorionic gonadotropin (hCG) under the supervision of your veterinarian be can helpful because properly selected mares will ovulate within 24 to 48 hours after hCG treatment.

Signs that the mare Is ready for breeding - teasing

Mare signaling receptivity to a stallion

A mare allows the stallion to approach when ready to breed. Non-receptive mares generally kick-out at stallions and do not allow them to approach.

The most intense estrus behavior occurs when a mare is most sexually receptive to a stallion and this intense behavior lasts about three days. A mare in heat may actively seek out a stallion or attempt to stay in close proximity to a stallion.

Accurate estrus detection is often done by using different "teasing" methods along with a scoring system that can be applied to individual mares. The goal in teasing is to identify changes associated with estrus that are typical for that mare when she is most receptive and capable of being bred.

The person doing the teasing needs to be an excellent observer of mare behavior and a good record keeper since the individual behaviors that a particular mare exhibits during estrus will be fairly consistent from one cycle to the next and during subsequent cycles.

Signs of Estrus in the Mare include:

Signs of Diestrus include:

Ensuring the safety of the horses and handlers during teasing is a major concern. Several systems have been developed including stall teasing, using a tease rail or bar, teasing over a paddock fence, or using a teasing chute or cage. These systems keep handlers and horses safe and provide opportunities for close observation of the mare's behavior.

Many breeders use a "teaser" stallion to determine if the mare is receptive to breeding.

When a teasing rail or bar is used, the mare and stallion are separated by a partition that provides physical separation to protect horses and handlers. The wall or partition should be approximately four feet high. This method requires handlers for both horses.

Teasing over a paddock fence assumes that a mare in estrus will move toward the stallion and show interest.

Usage of a teasing chute allows one or more mares to be placed in a chute and then teased by a stallion that is in close proximity to the chute with an observer watching the mares closely.

When a teasing cage is used, usually the stallion is put in a pen inside a paddock and mares are allowed to approach the stallion voluntarily.

Basically, the role of most stallions is to impregnate mares. This means producing semen containing adequate quality and numbers of spermatozoa to fertilize the mare's ovum.

Testicular size is a good indicator of sperm production capability with stallions with larger testicles normally having a larger daily output of spermatozoa. When a veterinarian conducts a breeding soundness exam, measurement of scrotal circumference is one of the procedures used.

Daily spermatozoa production is also influenced by the season with the lowest production usually occurring from September through February. Production then increases in March, then peaks in May and June and begins to decline in July and August. As with mares, use of artificial lighting programs will increase or maintain spermatozoa production during the shorter daylight months.

A stallions testes are housed in the protective covering of the scrotum which regulates the temperature of the testes. Since stallions need approximately 57 days to produce mature spermatozoa, injuries and infections that cause abnormal rises in temperature can have long-term effects on the stallion's breeding season.

Libido and breeding behavior in the stallion

A stallion tests the air for pheromones that indicate that the mare is ovulating.

Libido is the term used to denote the degree of sexual urge or drive in animals. A stallion with a high libido will exhibit eagerness to mount and attempt to breed a mare.

Some stallions have a strong libido and others have a relatively low libido, both of which can cause problems in breeding if the stallions are not managed carefully.

The classic behavioral display of a stallion when it "checks' a mare is to lift its nose into the air and curl its upper lip. This is known as the "flehmen response" with "flehmen" translating roughly to "testing."

Although mares and geldings occasionally show a flehmen response, stallions in the presence of a mare in estrus often exhibit this behavior. The response appears to help the stallion trap the pheromone scents, or chemical signals, emanating from the mare. As the stallion draws in the odor, he curls his lip to temporarily close the nasal passages and hold the particles inside.

The upward head tilt helps the airborne molecules linger in the vomeronasal organs that are located under the floor of the horse's nasal cavity. 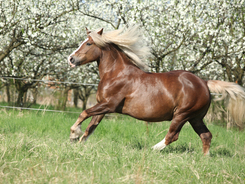 How to Prepare for Parturition