“Fever” is defined as body temperature higher than normal, caused by something that triggers an increase in the body’s set point for normal. “Normal” for a horse, however, can vary from about 98 degrees to 101 degrees, depending on the individual, with 100.5 being average. A newborn foal has a higher temperature than an adult horse (up to 102).

Every horse owner should get an idea what their horse’s normal temperature is by taking it daily for a few days.
© 2018 by BAFX Products

The horse's brain has a temperature-control mechanism.  The hypothalamus at the base of the brain determines the temperature set point. If there is something wrong in the body such as an infection, the body produces chemicals that change that set point and make it higher for a while and this is what we call a fever.  In other situations the horse's body simply becomes hotter but the brain set point hasn’t changed.

For instance, if you ride your horse and work him hard on a hot day, his temperature rises, but this is hyperthermia rather than fever.  Causes of hyperthermia include exercise, extreme heat and humidity, and anhidrosis (a condition in some horses that interferes with their ability to sweat—and they can’t cool themselves).  Most of the time, if a resting horse has an increased rectal temperature, however, it’s due to fever.

When there’s an infection, the body recognizes the invading organism and the first-alert immune cells signal to other immune cells to start releasing cytokines. Many of those go to the brain and increase the set point in the hypothalamus; the body chooses to be at a higher temperature while fighting the infection.

The increase in temperature and metabolism helps the body fight off infections by speeding up all body processes, including blood circulation, bringing more nutrients, oxygen and healing factors to wherever they are needed.

Fever occurs with most infections, so fever in itself doesn’t tell us what’s wrong with the horse. Some infections are associated with low to moderate fevers, and a few infections tend to cause very high fevers. When a horse has fever of 105 or higher, possible causes include strangles, Anaplasmosis, Potomac Horse Fever, and some of the viruses like equine influenza.

High fever can also be a sign of endotoxemia. Endotoxins are part of the cell wall of certain bacteria that reside in the horse’s intestine. Many gram negative bacteria live and die there and go through their life cycle in the colon.

When a horse has colitis (inflammation of the colon), some of the endotoxin from bacteria’s dead cell walls may leak through the colon lining into the bloodstream. This causes a very dramatic cytokine response, and fever. This is not an infection, but a very damaging toxic condition in which the body over-reacts to the dead bacterial components.

If a horse is sick he continues to have a fever until his body starts winning the battle against whatever problem it has been fighting. After proper diagnosis, appropriate treatment can be started.

Sometimes this will include strategies to reduce the fever. Many horse owners worry about a high fever and want to do something to treat the fever as well as the disease, but fever in itself is usually not a problem unless it gets extremely high.

We often treat a fever, however, if the horse feels miserable and won’t eat or drink, which may happen if the fever gets above 104.  Most horses will not feel good when it gets this high. Usually the vet will prescribe a non-steroidal anti-inflammatory drug like flunixin meglamine (Banamine) or phenylbutazone to bring down a fever.

The important thing for horse owners to know, however, is that these drugs do not work any better if given at higher doses than recommended, and will actually be harmful. Horses have died from too much Banamine or bute.

If the fever doesn’t come down, don’t give another dose. Consult your veterinarian to see what the highest safe level would be. Keep in mind that these drugs are much more toxic when the horse is not eating or drinking.

If the horse is feeling miserable and you are giving him NSAIDs and he is not getting better, don’t give these drugs for more than a day or two without having your veterinarian take a look at the horse.

There is nothing life threatening about a low-to-moderate fever. If your horse has a fever of 102 for a week with a mild respiratory disease or some other self-limiting problem, the fever itself won’t hurt the horse. If the fever is 105 or higher, however, talk to your veterinarian; some of these conditions need specific treatment.

Monitoring the horse’s rectal temperature when he is ill can give clues regarding his state of health, and can also be important information to tell your veterinarian. An acute fever generally rises rapidly to a high peak, then starts back down. A persistent high fever is less common, but could be more serious.

Chronic low fever may persist if the horse has an infection that does not resolve. Some chronic fevers come and go, such as in horses with EIA (equine infectious anemia). A horse with pleuritis or a peritoneal abscess may have lingering fever. Your veterinarian may gain clues regarding the horse’s problem by tracking the fever, so have him/her examine the horse before you attempt to treat the fever.

A fever’s severity, duration, patterns of highs and lows, etc. may help your veterinarian determine what might be wrong with the horse. 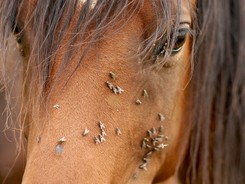 How to do a fecal wash