If you have determined that your horse doesn't need shoes for the type and amount of riding you do, regular trimming for balance and rounding of the sharp edges of the hoof wall will be sufficient to humanely maintain your horse's soundness. Sound trimming is based upon a knowledge of the A, B, C's of farriery - Anatomy, Balance, and Conformation.

Today's horse owner can become very confused and even frustrated by trying to make sense of the many types and names for hoof trims. Matt Gillis, editor of Today’s Pro Farrier, has said, "A trim with a name is a dangerous thing."

Many of these "high performance" trim styles are simply a regular trim by a less experienced practitioner that you pay more for.

Some of these so-called trims are not based upon sound principles – others are simply renaming accepted time-tested knowledge. The safest course is to hire an experienced, skilled farrier that can apply sound hoof trimming principles and, if needed, accurately apply well-fit shoes.

For centuries enlightened farriers have used the basic principles of three-dimensional balance to trim and shoe horse feet. When viewed from in front or the rear - the foot base is trimmed perpendicular to the axis of the limb, when viewed from the bottom - the edge of the wall is symmetrically dressed around a point ½ inch back from the point of the trimmed frog so that the hoof wall is parallel to the outer surface of the coffin bone, and when viewed from the side - the hoof wall is trimmed so that the upper one-third of the wall is parallel to the axis of the pastern.

Recently, it seems to have become popular to ignore the intelligence of the past and instead to rely on the opinions of modern arrogant gainsayers. Much of their hype is based upon false premises – the most prevalent of which is saying that the Mustang or wild horse provides a model of the ideal "natural" hoof. 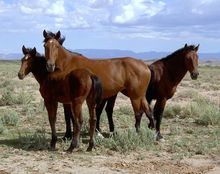 We have bred and selected horses for uses that are different than those naturally possessed by wild horses, all the while paying little attention to their resulting long-term soundness.
© 2017 by Kersti Nebelseik

This ignores the fact that we have bred and selected horses for uses that are different than those naturally possessed by wild horses, all the while paying little attention to their resulting long-term soundness. We have sacrificed foot strength to get other desirable traits, forgetting that there are limits to the wear a domesticated (and often weak) hoof can tolerate.

Fortunately, the majority of professional farriers still use time-tested principles when applying hoof trimming skill to their client’s horses. However, a number of hoof care practitioners have adopted some of the various “trims with a name” and effectively sell them to the public as a one-size-that-fits-all. Since every horse is different, every accurate hoof trim must be customized to the individual.

I recommend you seek out the most skilled farrier in your area to do your foot work. Reputation is important. Ask the respected horsemen in your area who they trust to trim and shoe their horses. There are definitely some practitioners you will want to avoid. Inexperienced trimmers and horseshoers can do a lot of damage very quickly to your favorite horse.

A horse being trimmed can be "quicked" (invading the sensitive structures) by cutting a hoof too short. A horse being shod can be quicked by a mis-driven nail. Debilitating abscesses may result. Out of balance hooves stress leg joints and disturb foot circulation.

In an effort to fully answer your question, I will discuss a few “trims with a name” that I am personally acquainted with. No doubt there are others.

Many of these "high performance" trim styles are simply a regular trim by a less experienced practitioner that you pay more for. “Trimming only” has become popular in Europe because so far it is judged to be outside the humane laws that have been passed by government assemblies to regulate horseshoeing. Of course, horses used rarely or on soft surfaces don’t need shoes.

"Trimming only" has gained in popularity in America during our down economy because it is cheaper than shoeing and its advocates are able to begin their practices with less skill training and experience. There are no licensing laws to prevent unskilled persons from doing hoof work on equines.

Trimming from a horse's hoof

Sound trimming is based upon a knowledge of the A, B, C's of farriery - Anatomy, Balance, and Conformation.
© 2017 by Mark Sellers

Certification doesn’t mean much when it’s issued by the person who they paid to teach them. In a less regulated society it is up to horse owners to become informed and protect their animals.

One "certified" and franchised trim style insists that the heels be cut so low at first that they may bleed. The future soundness of the horse may be compromised. The franchise is sold to practitioners who are encouraged to charge higher fees, even if they cripple your horse. The promoter should more closely follow the medical creed of "first do no harm." One of her franchised trimmers was sentenced in a British court for laming horses several years ago.

Advocates of another trim style insist on making the coronary band parallel to the ground when viewed from in front to remove hairline distortions. This is a good idea if a horse has perfectly straight legs. However, most horses do not and therefore this practice can lead to a crippled horse when the legs have angular deviations of varying degrees (as most horses do) and the horse is stabled in dry conditions.

A more comfortable, sensible solution is the traditional method of trimming the bottom of the hoof perpendicular to the limb’s center of gravity.

The so-called "Mustang trim" style is promoted by claiming that a study of the wear on the dead feet of Western U.S. wild horses tells us how all domestic horse feet should be trimmed. He says all horse feet should mimic the wear of those in the Mustang population. He bases his conclusion on several false anatomical and physiological assumptions.

The inherited unsound feet (especially those with underrun heels and thin soles) of domestic horses do not respond well to the principles advocated by the promoter. A recent study of Brumby (wild horse) feet in Australia and New Zealand by Dr. Brian Hampson revealed the fallacy of using feral horse feet as an ideal.

However, to be useful, the expensive boots must be snugly fit, put on a frequently trimmed, dressed and balanced foot, and cause no sores at the heels or other problems when the horse is ridden over varying terrain.

Experienced farriers are horse welfare advocates. They are sensitive to a horse’s comfort and well-being. Denying protection to the weak feet of selectively-bred, domesticated horses is a humane welfare issue. When you have your horse’s hooves trimmed (and shod when needed) by a knowledgeable, recommended professional farrier, you can feel confident you are doing the best for your horse. 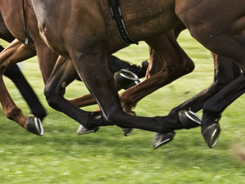 Preparing for the Farrier's Visit

Are Hoof Care Products Worth the Cost …

My horse has a club foot. Can it be treated …

Hoof Care for a Horse with Laminitis and or Founder